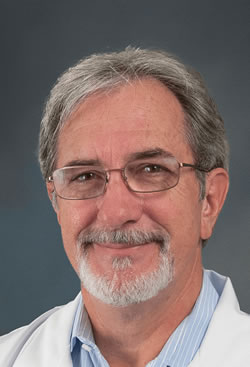 The expression of circadian rhythmicity in the brain is manifest in many diverse neurobiological functions, from electrical activity and metabolic states to temperature rhythms and neurosecretory profiles. A better understanding of the temporal interaction and coordination of circadian systems would serve to promote many disciplines, e.g. psychiatry (sleep-wake disturbances, seasonal affective disorders, age-related dysfunctions, etc.), reproductive biology (developmental dysfunctions, disruptions in hormonal rhythms, fertility disorders, etc.), and oncology (chronopharmacology, neuroimmunology) to name just a few examples.
Research in our lab is focused on the brain hormone melatonin, which acts on both central and peripheral tissues. Melatonin has been shown to participate in many divergent biological processes in all vertebrate animals, and even in some invertebrates. This hormone is recognized to regulate seasonal reproduction in a variety of vertebrates, it modulates the phasing of mammalian circadian rhythms and it modulates peripheral organ functions in many animals.
Melatonin has long been studied in the context of reproductive physiology, and more recently, as an output marker of the hypothalamic circadian clock. The current view is that melatonin’s primary endogenous role is as a neurochemical signal of subjective night, since its synthesis and release from the pineal gland occurs almost entirely during the dark phase of the 24-hour day/night cycle. Our laboratory was the first to identify melatonin receptors in the uterine smooth muscles (myometrium) of pregnant and non-pregnant women, and to show differential signaling as a function of reproductive status. In this regard, we discovered marked increases in the expression of melatonin receptors at the time of labor, consistent with its pro-contractile actions in synergizing with oxytocin to promote myometrial smooth muscle cell contractions and gap junction dye spread in vitro. 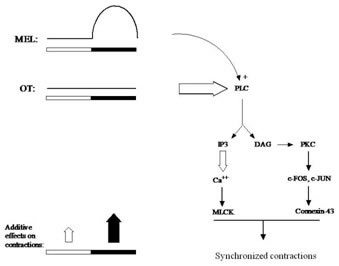 In view of these data, we seek to better understand how myometrial melatonin receptors are regulated during term and preterm labor, and how these receptors interact with and influence oxytocin receptors and other components of the contractile-activating system in this excitable tissue. Further characterization of novel regulatory networks in the human uterus involving melatonin and OT can be expected to motivate the fields of reproductive biology and obstetrics. For example, such data will be important in the development of new strategies for supporting or promoting parturition in pregnant women whose uterine contractility is inadequate for normal labor.This research can also contribute to the search for novel tocolytic agents that help to maintain pregnancy in the face of pre-term labor, a major cause of neonatal mortality in Western societies. We have obtained numerous patents toward this end.
Since the discovery of its reported free-radical scavenging properties, melatonin has garnered increasing attention as a potential prophylactic in the context of neurodegenerative disease. Involvement of melatonin in the pathogenesis of Alzheimer’s disease (AD) has been suggested from clinical studies showing that AD patients have decreased blood and CSF levels of melatonin. Indeed, lower CSF levels of melatonin have been strongly correlated with progression of AD neuropathology. In addition to these findings, several epidemiologic studies have suggested that melatonin treatment provides cognitive benefit to pre-dementia (mild cognitive impairment; MCI) and AD patients. We have published several comprehensive investigations of melatonin’s therapeutic potential in a transgenic mouse animal model of AD. These studies evaluated the “protective” effects of long-term melatonin administration to AD mice on their cognitive performance, brain Aβ levels/deposition, cytokine levels, and expression of antioxidant enzymes — all in the same animals. We found that long-term melatonin administration protects the brain of AD mice against cognitive impairment while concomitantly reducing brain amyloid load, lowering brain cytokine levels and diminishing brain oxidative stress. Collectively, our findings provide support for long-term melatonin therapy as a part of the strategy for directly abating the progression of Alzheimer disease.

Melatonin and the regulation of labor

Our working hypothesis is that an increase in MTR expression during labor permits MEL to synergistically potentiate other uterotonic factors. By extension we envision that premature myometrial expression of MTR may contribute to preterm increases in contractility and subsequently to premature labor, in at least some women. Our specific aims are to establish the degree of melatonin’s uterotonic activity in primary human myometrial smooth muscle (MSM) cells and to evaluate further the expression of MTR in preterm labor. We are continuing to characterize melatonin signaling pathways in human MSM cells, and also have embarked on early clinical trials to assess the impact of acutely lowering melatonin levels on uterine contractions.

Our investigations have identified multiple mechanisms through which melatonin may be protecting AD transgenic mice from cognitive impairment. In an effort to better understand the specific mechanisms of melatonin action against AD, we are collaborating with several groups to address several important questions that have arisen from our preliminary data. For example: What is the role of the immune system in melatonin’s cognitive benefits? What ameliorative effects might melatonin have on mitochondrial function and dysfunction? We are addressing these issues by comprehensively exploring explicit mechanisms of melatonin action in vitro with cell lines expressing the sweAPP protein and by using transgenic AD model systems. In collaboration with Dr David Meckes in our department, we are also attempting to identify blood biomarkers of AD risk in human subjects that could provide for newer, more effective treatment options in the future.