The Adventures of Charlotte Maguire:  From ‘Girl Doctor’ to Philanthropist 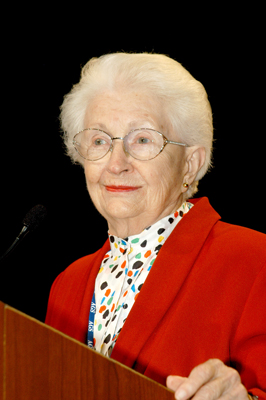 Reprinted from the Spring 2010 issue of FSU MED magazine

If your only mental picture of Charlotte Edwards Maguire is of a petite white-haired charmer holding a million-dollar check, picture this.

Picture a first-grader whose parents encouraged her to learn at least one new thing each day. Picture a 7-year-old girl losing her mother, then being raised by a caring father. Picture a would-be physicist having to cut short her studies in Germany because of Adolf Hitler’s growing menace.

Picture a young medical student working 11 p.m. to 7 a.m. as a long-distance telephone operator seven days a week. Picture her in class, the only woman, resolutely enduring a faculty’s hostility. Picture a young pediatrician with a soft spot for crippled children and others who were medically underserved. Picture a mother of two, now also a widow, getting up at 4 a.m. to tend to her orange groves. Picture her as a board member and consultant in demand by seemingly everyone.

Picture her learning from her father’s Quaker family that our obligation – during life, not after death – is to give back to the community what we have amassed.

She took that lesson to heart.

The Florida State University College of Medicine’s library is named for her. So is its Center for Clinical Simulation. So is a professorship in the school’s Department of Geriatrics. So are numerous scholarships.

During the 10th anniversary of the College of Medicine’s creation, it’s worth celebrating this compelling woman, the school’s top individual donor.

“She has very generously donated her time, talents and resources to help this new model of medical education grow and thrive,” said Dean John P. Fogarty. “She is loved, admired and respected by all who are lucky enough to know her.”

Tough times
Charlotte Edwards was born Sept. 1, 1918, and grew up in Orlando. Her family had moved from Illinois, where her father had a mercantile business, because the doctor thought a warm climate would be better for her mother’s severe diabetes.

“My mother died in October 1925,” she recalled. “My father, grandmother, teachers and friends all helped me through some difficult times.”

One scary time arose in 1938 when she was on a scholarship to study chemistry and physics at the University of Heidelberg in Germany. While she was there, the rumblings of what would become World War II grew louder, and her father demanded that the U.S. embassy “bring her home now!” She was awakened during the night by three people who told her she was leaving immediately.

“They put me on a boat with no name, no lights,” she recalled. On the long journey to Key West, they ran out of food.

Back in the States, she attended Memphis Teachers College and graduated with a bachelor’s degree in 1940.

When one of her fellow students filled out an application for the medical school in Memphis, she and three friends did the same – just for fun. They threw them into the trash, but – as she tells the story – a dean who had it in for them scooped up those applications, signed them and sent them in. And she was accepted!

But not for long. On the third day of class, she said, she was dismissed, told that someone else needed that spot. At first she was delighted, thinking she could get back to her first love, physics. But through her grandfather’s intervention, she enrolled at the University of Arkansas medical school.

She got a chilly reception. The faculty, she said, thought a woman had no business there.

“The professors hated every minute of it,” she said.

Her fellow students, however, took notes for her whenever the professors banished her to another room. She stuck it out.

Never idle, she also had a night job as long-distance operator. She used the time between calls to study, to nap – even to sew the white skirts that went with her physician’s white coat.

She graduated with her M.D. in 1944 and headed home to Orlando, where the newspaper reported “the attractive woman physician was appointed to serve on the medical staff of the Orange General Hospital.” A memorable headline proclaimed her “First Orlando Girl Doctor.”

In 1946 she became the first woman in Orlando to establish a private practice in pediatrics, which she operated for 22 years.

Suddenly, citrus
In 1948 she became Charlotte Edwards Maguire. Raymer Francis Maguire Sr., a well-known lawyer, citrus grower and land developer in Orlando, already had children, and he and Charlotte Maguire later had a son of their own.

Because he was such an active University of Florida alumnus, she was asked to assist in the creation of the UF College of Medicine in the 1950s.

That decade was incredibly busy for her. Her 61-line listing in Who’s Who in the World includes private practice; hospital staff member; delegate to World Health Conference in London, working directly with Prince Phillip; chief of staff for Children’s Home Society physicians in Central Florida; director of Orlando Child Health Clinic; director or consultant for two crippled-children groups; and on and on.
In 1960, her husband died.

“I inherited the management of many acres of citrus,” she said. “Actually it was 100 miles round trip to visit each of the five groves and manage the many different aspects of cultivation and preparing for marketing. I did that for 10 years. I went to Florida Southern College and got a citrus certification.”

Toward the end of that decade she moved to Tallahassee and began a career in government. She had important jobs in the state Department of Health and Rehabilitative Services and the federal Department of Health, Education and Welfare, even moving briefly to Atlanta and then Washington, D.C.

Eventually she sold the orange groves, but she continues to be trustee of her family’s Orlando Fashion Square shopping center.

Then the CPA called
True to her father’s wishes, about 20 years ago she began to distribute her wealth: first to her family, then the community. She thought she had taken care of everything – until one day she got a surprise.

“My CPA called and said, ‘Do you remember a savings account that you had in the bank as a child?’ I said, ‘Sure, my dad made me do it every week.’

“By the time I got out of school, they said, ‘Well, you need to buy some stock in the bank,’ so I had done that, but I had completely set it aside. You know, the stock doubled, and it tripled, and it did this and it did that, and I just never paid any attention.

“The CPA called me and said, ‘Well, it’s time to divvy up a little bit. You’ve got all this money.’ The CPA advised me that the federal government would be taking capital gains taxes.”

Fate was about to smile on Florida State.

It just so happened that Maguire’s lawyer knew Elena Reyes, now a professor at the medical school but then on the admissions committee of Florida State’s Program in Medical Sciences. She and the lawyer had spoken of PIMS’ hard-working, nontraditional students, and one day he invited her to talk about PIMS to a friend waiting in his office. The friend was Maguire, and before long she was having lunch with PIMS Director Myra Hurt. So it was that in 1999 Maguire donated $1 million to create the Charlotte Edwards Maguire Eminent Scholar Chair in the PIMS program.

In 2000, she became an outspoken advocate for creating the Florida State University College of Medicine.

“Dr. Maguire is a pioneer for women in medical sciences and an inspiration for future doctors,” said Sandy D'Alemberte, then president of Florida State. “She has dedicated her career to caring for those who needed it most – minorities, disabled children and the indigent – and has helped FSU establish a medical school where that philosophy will flourish.”

She takes great interest in the medical students, said Barbara Shearer, director of the College of Medicine library: “Recently when Charlotte visited the library, she stopped and gently touched a student on his shoulder and asked how he was doing.”

A million and one
The year 2005 brought an even bigger surprise. On Feb. 25, a crowd had gathered for a ceremony officially naming the medical library in Maguire’s honor. She stole the show by waving a dollar bill and announcing that she was giving the college an additional gift – of $1,000,001. (The extra dollar increased the state’s match from 70 percent of the total amount to 75 percent.)

The new gift was earmarked for geriatrics.

Since 1991, Maguire has lived in a comfortable home at Tallahassee’s Westminster Oaks retirement complex. There, with her 10-year-old sheltie named Windy, she pursues genealogy and painting. Her portrayals of flowers, as well as exotic animals from around the world, brighten her walls.

Not surprisingly, her generosity has improved the residents’ quality of life. Most recently, she donated $1 million toward Westminster Oaks’ new Maguire Center for Lifelong Learning.

So Westminster Oaks, like the College of Medicine, owes a huge debt of gratitude to Charlotte Maguire – and to that phone call from her CPA.