Laurie Dozier Jr.: A Pillar of this Medical Community 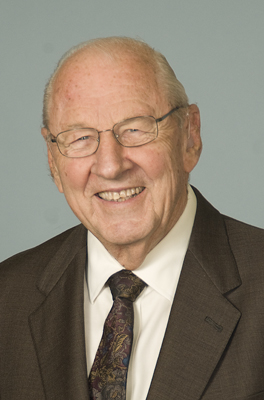 Laurie Dozier Jr., a longtime Tallahassee cardiologist who was one of the College of Medicine’s most generous friends, died March 6, 2012, surrounded by his family. Three days later, that huge family joined a grateful community in the medical school’s auditorium to say goodbye to the beloved philanthropist and medical leader. Dr. Dozier was 85.

“Without a doubt,” his delightful obituary stated, “he consistently brought to life even the dullest of occasions.” (Read the full obituary below.)

Health care was in his blood: He was, after all, the son of a co-founder of Tallahassee Memorial Hospital. The Leon County native earned his M.D. from Duke University in 1955 and practiced internal medicine and cardiology in Tallahassee from 1960 to 1991. He was co-founder of Cardiology Associates, which later became Southern Medical Group. He was known for his insistence that all patients receive the highest-quality care, no matter their social standing or ability to pay.

The College of Medicine is particularly grateful that in 2007 Dr. Dozier gave a planned gift of $2 million to be equally divided between Tallahassee Memorial and the medical school, which established the Laurie L. Dozier Jr., M.D. Professorship. At the time, his daughter Sarah Dozier Sherraden was director of the college’s Clinical Learning Center, where medical students learn patient interviewing and examination skills by working with people who have been trained to portray specific medical cases. She said that, although her father was concerned that the practice of clinical medicine was becoming a lost art, he was impressed by the College of Medicine’s emphasis on turning out good clinicians, and he wanted to see that continue.

“Dr. Dozier was an incredible pillar of this medical community,” Dean John P. Fogarty said just before the memorial service. “We are pleased and proud that, through his generosity to the College of Medicine, his legacy and memory will live on here through the professorship in internal medicine that he established to support teaching our next generation of future physicians their clinical skills.”

Below is the tribute Dr. Dozier’s family wrote.

Dr. Laurie Dozier Jr., MD, 85, a child of Leon County, whose parents Laurie L. Dozier Sr. and Mary Brown were children of central Georgia, passed away Tuesday evening surrounded by his family. Although a world traveler who explored all seven continents, often with family and friends in tow, Laurie loved this part of the world above all.

A fun-loving 1944 graduate of Leon High (Dopey Dozier in his senior year annual), Laurie joined the Navy, attended the University of Florida, came home and married Sarah Marie Simmons, the daughter of Jack Simmons, and went to work at Jack’s business, Elberta Crate and Box Co.

A mischievous, so-so student in his revered housemother Joree McFarlin’s SAE house, Laurie was urged on at a poker game (one of his glorious pastimes) by his childhood friend, Dr. John Sullenburger, to reconsider medicine.  In 1950 Laurie applied for and aced an interview at Duke University’s med school and, after a few remedial courses, “put on the afterburners..

Thereafter, Laurie preached the value of a solid education. The names of Laurie’s teachers at Duke and Emory are legend in his home and among his friends. As Laurie’s first grandchild approached high school graduation, he announced that he would begin the Granddaddy Scholarship Program. If a grandchild made above a 3.0 for a specific semester, he would pay an amount equal to the tuition for that term.

Laurie excelled in what was becoming the family business. In the early 1960s, along with his father who began practicing medicine in Tallahassee in the 1920s and his younger brother, Dr. Richard Dozier, they shared offices at the corner of Miccosukee and Magnolia. Beloved by his patients, Dr. Laurie L. Dozier Jr., M.D., was extremely proud to be a Medical Doctor and imbued his family with this appreciation. His daughter, Sarah Sherraden (married to Endocrinologist Dr. Terry Sherraden), was a practicing nurse and a health care administrator before she joined the founding staff at the FSU College of Medicine. Laurie’s son, Dr. John Dozier (married to former Hospice nurse Martha), is a Periodontist, and they are the parents of Dr. Carey Dozier (whose wife Tracy is a physician as well).

While Laurie treasured education and loved medicine (as exemplified by his significant gifts to FSU’s College of Medicine and TMH’s Foundation), his mind never rested and he was always looking for an intriguing opportunity. After years of failures (i.e., Flying Lawnmowers and Power Mirrors) and middling successes (land development), Laurie found his Holy Grail . . . Automatic Gate Openers. As a major investor and Chairman of the Board of GTO, a local manufacturing firm, he enjoyed years of thrills as he worked with Chuck Mitchell to save, and then build, GTO into a significant business.

However, above all these, Laurie’s love and affection for family and friends . . . and their love of him . . . and Laurie’s delight in, and great respect for, strangers of every make and model . . ., this is what everyone who knew Laurie will remember most . . . and without a doubt, they will remember that he consistently brought to life even the dullest of occasions.

After being diagnosed with Alzheimer’s, Laurie and his wife of 25 years, the wonderfully vibrant Margaret Zygmuntowicz, continued their travels until Margaret’s passing.

For the last few years it has been Laurie’s great fortune to have enjoyed the companionship of lifelong friend Kimmie Croy, including a trip to Europe three years ago that found Laurie in the nose of a glider soaring above the valleys of Switzerland with Margaret’s son Mike Flood (children Callie, Jake and Zack).

Laurie was able to remain at home in large measure because of his wonderful caregivers Diane Shaheen  and Magdalena Toro, the incredibly calming attention of so many from Big Bend Hospice and the wisdom and care or Dr. Jesse Judelle.  We should all be so lucky as to have such special people in our corner.

If so inclined, you may remember Dr. Laurie L. Dozier Jr., M.D., with a contribution to the Tallahassee Memorial HealthCare Foundation, the Margaret Z. Dozier Hospice House and/or . . . just let out one, long-winded, heartfelt: