Reprinted from the Spring 2010 issue of FSU MED 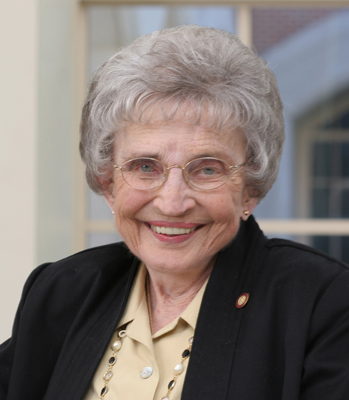 In September 2009 the College of Medicine lost one of its chief supporters when businesswoman, entrepreneur and community leader Mina Jo Powell died. “Mina Jo was a wonderful friend of the College of Medicine who recognized our potential early,” Dean John Fogarty said. “We are grateful for her support and her guidance in our early years.”

Actually, the whole university has benefited from her talents and generosity. In fact, adjacent to the Longmire Alumni Building is the Mina Jo Powell Alumni Green, named in 1990 to honor her lifelong service to the university she attended. That green space had been a gathering spot for decades, but as post-World War II enrollment increased it began to be viewed as a possible building site. Each time, according to retired Alumni Coordinator James Melton, Ms. Powell rallied to preserve it. Eventually, the story goes, President Bernard Sliger advised that naming the green after someone would likely eliminate the construction threat. So on Nov. 10, 1990, it was named the Mina Jo Powell Alumni Green.

She was born April 11, 1928, in Gainesville. Her father built Powell's Modern Cottages in Gainesville, and all of his children later entered the hotel business. Ms. Powell started in 1946 at the Florida State College for Women (which would become Florida State University) and graduated in the Class of 1950. She was awarded a Master of Arts degree in social work from FSU in 1963. For many years she and her sister Esther were co-owners and operators of the Holiday Inn in nearby Thomasville, Ga. During that time, the hotel began hosting the Seminole football team before its home games.

Ms. Powell’s credentials as a football fan were impressive. She founded the Southwest Georgia Seminole Club in Thomasville and was one of the original Golden Chiefs. She also was the first woman to serve on the board of directors of Seminole Boosters, a post she held from 1974 to 1984.

Her generosity to Florida State has included gifts to endow the Mina Jo Powell Presidential Scholarship Fund and to help establish the College of Medicine.