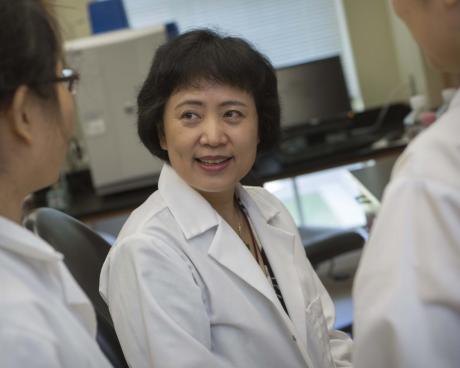 For nearly 30 years, Yi Ren has studied macrophage – a type of white blood cell that engulfs foreign material, including dead cells, at the point of a traumatic injury.

Her fascination and dedication to studying macrophages can be attributed, in part, to its mysterious ability to transform itself from a healer to a killer.

Ren, a professor of biomedical sciences at the College of Medicine, is especially interested in the role macrophages play with spinal cord injuries, where the secondary injury is often greater than the initial trauma.

“In the injured spinal cord, because of mechanical damage, the tissue damage generates a lot of cell debris, which we call myelin debris,” Ren said. “Macrophage migrates to the injury area to eat myelin debris and becomes myelin-laden macrophage.

“They just accumulate in the injured area for long periods of time, which generates lots of bad consequences. They occupy the space so other cells cannot get in. It prevents other useful cells from entry.”

Not only do the macrophage lose their primary function – consuming damaged cells – but they produce cytokines, which amplify inflammation and affect the body’s ability to repair damage in the central nervous system.

Ren’s work is supported by a $1.9 million grant from the National Institutes of Health’s National Institute of Neurological Disorders and Stroke. Ren, who earned a medical degree in China but wanted to dedicate her career to research, is seeking answers to questions that could open the door to improved outcomes for those suffering from spinal cord injuries.

“Why (has) this myelin-laden macrophage lost the function? Why do they not go away once they do their job?” Ren said.

“We’d like to know whether we can change this macrophage function and rescue the normal function, changing the tissue-killing macrophage to tissue-healing macrophage for neuro-regeneration. We want to develop a new treatment strategy and hopefully, one day, apply this to the human patient.”

Ren has an additional, related NIH grant funded over two years and $400,000, exploring the idea that the unwanted version of macrophage not only remains in the injured area indefinitely. “They crosstalk with the surrounding cells,” she said. “They interact.”

To understand this “crosstalk,” her team is tracing the distribution of myelin-laden macrophage through the study of exosomes – particles that are smaller than cells and can only be seen through an electronic microscope.

Myelin-laden macrophage produce the exosomes, then ship them to the microglia, much like a factory produces a product and ships it to a customer. The team wants to study what kind of information can be shipped along with the exosomes to the microglia, also known as microglial cells, a specialized population of macrophages found in the central nervous system.

“We’d like to study whether the exosomes can carry important information between those two types of cells,” Ren said. “What kind of consequences will we have if we stop this crosstalk or interaction? What will happen if we encourage this interaction? Will it be beneficial for function recovery?”

Her lab already was using a four-year, $450,000 award from the National Science Foundation’s Division of Mathematical Sciences to develop statistical learning methods for revealing molecular signatures of the microvascular changes found in central nervous system injuries.

She found that blood vessels damaged in spinal cord injuries regrow differently due to the presence of endothelial cells. Consequently, the blood vessel becomes bigger and inflammatory and, she suspects, contributes to spinal fibrosis.

The study aims to develop statistical machine learning theory and methods to answer questions regarding the identification of new subpopulations of micro vessels with disease-relevant functions in spinal cord injury.

“The three grants focus on different types of cells, but are all about micro-environment,” Ren said. “A lot of people focus on neurons and neuro-regrowth. We’re working on the environment…We think the micro-environment improvement is the prerequisite for neuro-regeneration. I hope that’s right. We should provide better evidence after we have finished this project.”