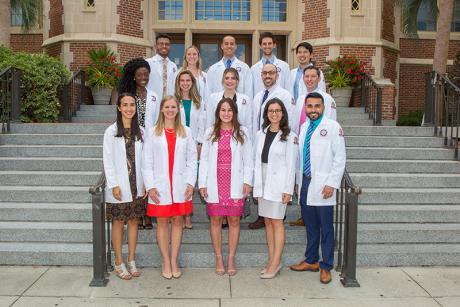 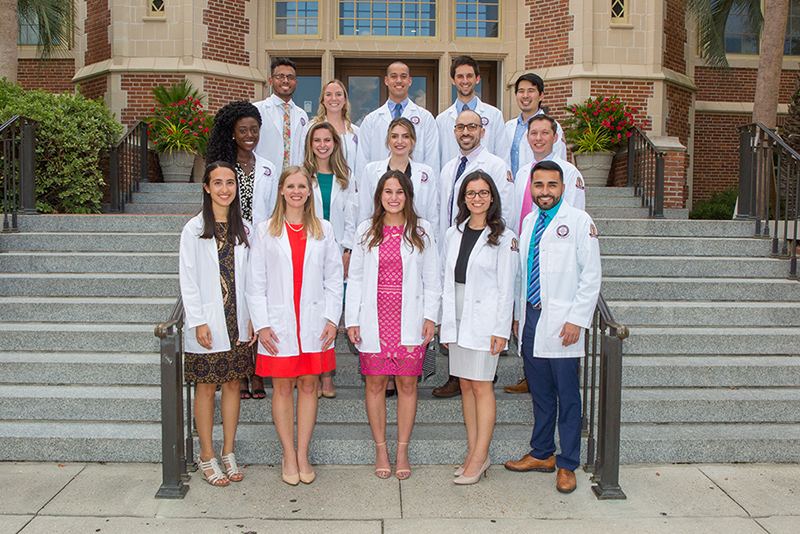 “Exemplary”: That’s the ranking the College of Medicine’s Chapman Chapter of the Gold Humanism Honor Society has just earned. The news arrived April 23 from the Arnold P. Gold Foundation.

“It is reassuring for patients, alumni and donors to see that the medical institution they support and depend on recognizes the importance of keeping health care human,” foundation officers wrote as part of their announcement to the GHHS.

In the world of medical education, humanism is all about promoting patient-centered care. Not just paying lip service to it, but doing everything possible to train future physicians to focus on the patient, not the disease.

“I know we are one of the most active chapters in the country,” said Daniel Van Durme, co-advisor (with fellow faculty member Suzanne Harrison) of the FSU Gold Humanism Honor Society chapter. “First-year students learn about GHHS at their White Coat Ceremony. Second-year students hear from GHHS students during their Pre-Clerkship Boot Camp course. Third-year students hear from the GHHS students throughout their clerkships. And fourth-year students participate in the annual food drive for Second Harvest of the Big Bend. All students learn about the Humanism in Medicine essay contest, and there are other activities as well. We also have excellent widespread participation in the nomination process.”

In each graduating class, 10-15% of students are selected for induction into GHHS. Nominations are sought from classmates, faculty and staff, based on students’ excellence in clinical care, leadership, compassion and dedication to service. The inductees are regarded as “doctors’ doctors,” the kind of healers you’d want taking care of your own family because of their focus on patients.

One of those inducted from the Class of 2020 was Reema Tawfiq.

“Every year the inducted members of GHHS organize a charitable act to give back to our community as a final hoorah to the core values of a humanistic physician, which are collaboration, compassion and caring,” said Tawfiq, who was an officer with the Chapman Community Health Program, and will pursue her residency training in internal medicine. “This year I volunteered alongside Ariana Trautmann, April Graham and Barbara Christakis to organize and oversee the GHHS Class of 2020 project.”

FSU’s branch was named the Chapman Chapter to acknowledge the generous support of the Jules B. Chapman, M.D., and Annie Lou Chapman Private Foundation.

“I am very pleased by the news that the Chapman Chapter of the GHHS received the highest Exemplary ranking,” said Robert Watson, College of Medicine professor and trustee of the foundation. “More important, I know that Mrs. Chapman would be ecstatic.”

That ranking is the highest possible. The foundation said chapters that earn the Exemplary ranking meet frequently, participate in activities in their community – as CCHP does – and are embedded in the culture of their institutions.

At FSU, the Chapman Chapter has a $100,000 endowed Humanism Fund specifically created to support it. Beyond that, the Chapman Foundation separately donates each year to purchase white coats, to support HEAL Magazine and to help with students’ travel to the college’s rural training site in Immokalee, among other activities. More recently, more than $125,000 has been donated to create the Chapman Humanities and Arts in Medicine Program, which will include redoing the garden where a plaque for deceased student Matt Wittman is now in place.

“The knowledge I gained at the FSU College of Medicine has been to provide the best care for my patients as well as to be a valuable member of the health-care team,” Tawfiq said. “The knowledge was not just the black-and-white of medicine. It includes the emotional impact a person experiences as a patient, the barriers in obtaining and providing care, and other social determinants of health.

“I remember there were days I was exhausted and felt like I could not study or work anymore, but the unbreakable motivator was always the impact my efforts would have on someone’s life. As a member of the CCHP, I remember the drive I would feel to keep going after participating in a volunteer event.”

To learn more, visit https://med.fsu.edu/ghhs/home, or visit med.fsu.edu and search for "Chapman."