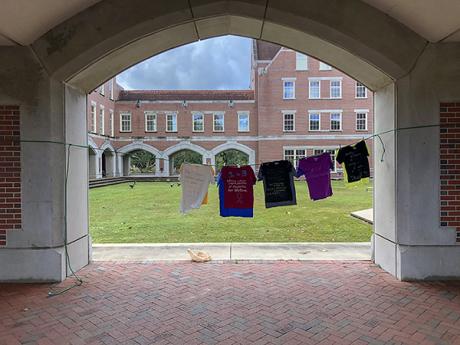 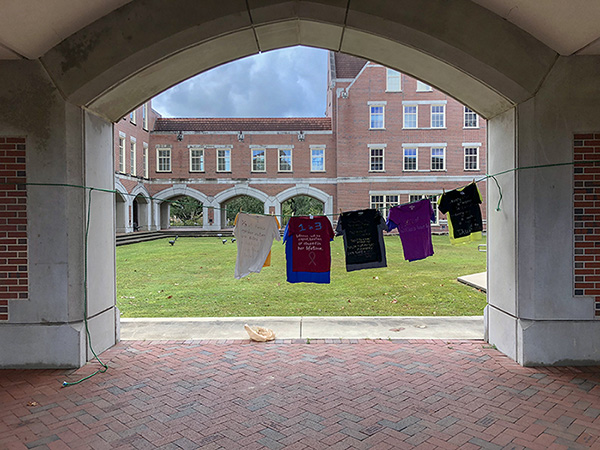 If you passed through the walkway between the College of Medicine and its research building recently you may have noticed what looked like a clothesline. In fact, it would have been difficult to miss.

Also difficult to miss: the message.

Statistics painted onto t-shirts highlighted the reality of domestic abuse and sexual violence.

“1 in 5 women will be raped in their lifetime”

The Clothesline Project is part of a worldwide campaign to raise awareness about violence against women. It started in 1990 on Cape Cod, Massachusetts, when a group of women learned that while 58,000 U.S. soldiers died during the Vietnam War, 51,000 women were killed as a result of domestic violence.

Women were encouraged to express their emotions about domestic violence by decorating a shirt and displaying it on a clothesline for others to view. It would serve as testimony about the issue of violence against women. The campaign spread across the U.S. and currently includes an estimated 500 projects nationally and internationally involving 50,000 to 60,000 t-shirts, according to The Clothesline Project’s website (theclotheslineproject.org).

FSU medical students in the college’s chapter of the American Medical Women’s Association (AMWA) joined the campaign to help bring awareness to topics that many struggle with on a daily basis.

For College of Medicine students, this means becoming aware of issues they one day may encounter as practicing physicians.

“The doctor-to-patient relationship is a very special one and knowing how to recognize domestic violence is one of the most important parts of the job,” said second-year medical student Kelly Mamelson, an FSU AMWA officer.

“Awareness can be raised for how common domestic violence and inter-partner violence is. Getting people more aware of these issues will help make med students more cognizant when interacting with patients.”

Mamelson said the College of Medicine’s AMWA chapter hopes to continue to hold the project annually and to possibly expand it to other parts of the campus.

“I hope it continues to make an impact on those who come into contact with it,” she said.