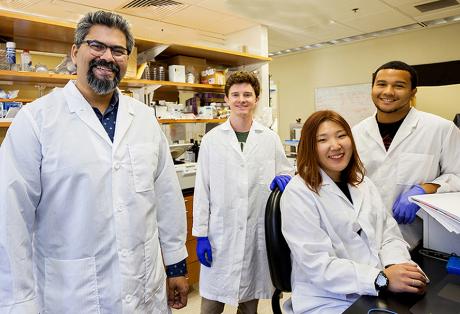 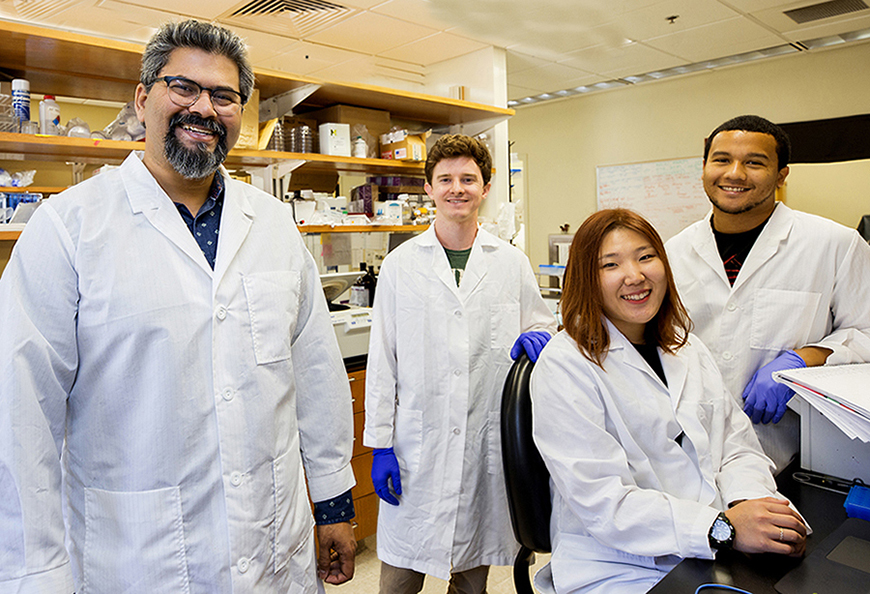 Sometimes, the most common problem can be the most challenging to solve. That’s been true of keloids – a type of non-cancerous skin tumor that causes major discomfort and is notoriously difficult to treat. As many as one-in-six African-American individuals are affected by keloids, compared to about 1-in-1,000 white Americans.
Keloids normally are removed surgically, but regrow almost 100% of the time. Recurrence sometimes can be reduced by radiation or steroid therapy, but both approaches come with a catch: there’s no evidence-based understanding of the most effective radiation doses, and only about a third of patients benefit from steroid therapy.
Only humans appear to develop keloids, so animal models are not available to establish radiation protocols or to develop other treatment methods.
That’s where the lab of Associate Professor of Biomedical Sciences Akash Gunjan got involved.
His team, including Ph.D. candidates, a medical student and fellow biomedical sciences faculty member Branko Stefanovic took a new approach. Using cultured tissues and cells from keloids that had been removed surgically from patients at local clinics by physicians George Cohen and Laurence Rosenberg, the team began determining the most effective radiation parameters for preventing the growth of keloid cells.
What they found seems to be a simple – but effective – solution.
“A single dose of low-energy radiation, delivered just skin deep within three months of surgery, is highly effective in preventing recurrence and has very minimal adverse effects,” Gunjan said.
Not only cost effective, it eliminates the need for multiple rounds of radiation that, in fact, may be harmful because of the adverse effects of the radiation protocols typically adhered to for cancer therapy.
Even better, the study found that this new approach is effective in preventing keloid recurrence even in patients who do not respond to steroids.
The study, published in the Journal of the American Academy of Dermatology, was co-authored by two Ph.D. candidates in the Gunjan Lab - Yuna Son and Ernest Phillips. Contributing author Kristin Price (M.D., ’18), participated as a Summer Research Fellow while in medical school. She’s now in the FSU-TMH Internal Medicine Residency Program.