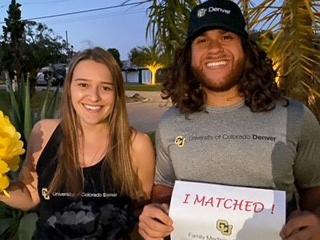 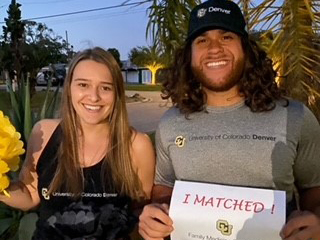 Jason Rivera has been covering a lot of ground in his journey through life, which might explain why he’s not fretting the 1,800-mile, 27-hour trek from his home in Daytona Beach, Florida, to Denver beginning Friday morning.

“I should be getting there Saturday because I’m crazy and I don’t want to stop,” said Rivera, who won’t be joining his graduating classmates for Sunday’s Florida State University College of Medicine commencement. “I’ll be tuning in Sunday virtually.”

In many ways it’s a fitting conclusion to Rivera’s four-year medical school experience, including his last two years at the Daytona Beach Regional Campus.

Between studying, championing social issues in medicine, tending to the care of his two teenage brothers, volunteering at the hospital, making clinical rounds, representing his College of Medicine classmates on local and state committees, and nurturing a relationship from a high school romance to marriage, Rivera isn’t slowing down.

Even the coronavirus pandemic has been left in Rivera’s wake; an annotation to his final two years at Florida State.

Now he’s off to the University of Colorado Anschutz Medical Campus and Denver Health for his residency in family medicine. His cross-country traveling companions include his wife of three months, Kimberly Weikel, brothers Joshua and Josiah and their dogs Balvin and Royce.

“I had already begun to make arrangements to move to Colorado,” Rivera said, explaining his decision to forego the ceremony. “My family is coming with me on the move. There are a lot of moving parts. For me to put all of that on hold to attend graduation…It’s not just about me, so I have to consider everything as a whole.”

Placing the best interests of others first is one of Rivera’s defining qualities, and not surprisingly, the reason he is graduating as the most decorated medical student in the 2021 class.

He is the recipient of the J. Ocie Harris Outstanding Student Award for exhibiting the most all-around promise of becoming a physician of the highest caliber.

Rivera also received the Daytona Beach Regional Campus Dean’s Award and is co-recipient of the honor for Outstanding Graduate in Family Medicine. Oh, and he’s one of six graduating students inducted into both the Alpha Omega Alpha and Gold Humanism honor societies.

College of Medicine professor George Rust, director of the Center for Medicine and Public Health, recognized Rivera’s compassion while traveling and working together during a week-long spring break trip to Immokalee, Florida, for a migrant health immersion experience.

“What you see in Jason is that rare combination of someone who can be great in one-on-one people encounters with tremendous empathy and a real connection with patients,” Rust said, identifying Rivera’s Spanish language skills, cultural insights, hard-working nature, humility and eagerness to learn. “At the same time, he’s always conscious of the bigger picture; the social justice issues. And he wants to make a difference on both levels.”

Rivera has a passion for becoming a health care change-agent, especially for those from underserved and socioeconomically disadvantaged communities.

“My family grew up incredibly poor,” said Rivera, whose parents are from Puerto Rico. “We’re from the Bronx, New York, and that’s where I spent the first nine years of my life before I moved down to Florida.

“My dad didn’t even go to high school. He dropped out after eighth grade and made his living selling drugs in the Bronx. My mom graduated high school and she worked very hard to take care of us…I’ve seen a lot of conflict in the family and everything revolving around finances; living in unsafe neighborhoods. I know what it’s like, but when you’re living there you don’t know what it’s like because everybody around you is in the same situation.”

The awakening of Rivera’s social consciousness began as an undergraduate student at the University of South Florida when he began associating with classmates within his biomedical sciences major.

“They don’t come from the same background as me,” he said. “Our paths would have never crossed if I didn’t have the opportunity that I have. I can now see, ‘Geez, why aren’t there more people who look like me in medical school? Why isn’t there more care for my people?’

“You have to understand that some people’s motives don’t align with the mission statement of Florida State, and in general the mission of what I feel a doctor should be, which when we take the oath is to care for everyone. And there’s no asterisk after that. That’s my approach. I have an undying passion for humankind and I don’t care about anything else. I’ve learned to be more unapologetic because I don’t think you should feel sorry for caring for everybody. But also, I try to be as empathetic as possible, even with those who don’t necessarily agree with what I think.”

After starting medical school in 2017, Rivera began to see what he called “egregious inequities” in education, and shortcomings in the health care system throughout the country.

“You realize if it’s not us as leaders taking an empathetic approach to fixing these problems, then who will?” said Rivera, whose first real practical application took place on the homefront.

He began to take responsibility for his younger brothers –  arranging health care, providing financial support where he could and making sure they had what they needed for school in Deltona, Florida.

Then, in the summer of 2018 – between his first and second years of medical school – his role expanded.

“I got a job out in Gadsden County as a health educator for migrant children, and I called the director and said, ‘Would you be OK hiring my brothers?’” Rivera said. “I was crazy for doing that, but I wanted them to stay with me that summer in my one-bedroom studio in Tallahassee because I knew I could provide them with more structure than they had spending the summer in their house in Deltona. I also wanted to teach them some responsibility.”

In addition to securing beds for Joshua and Josiah, Rivera was buying food and gym memberships, teaching them to drive and, eventually, buying them a car. They were also responsible for putting the money they earned from the summer in bank accounts opened in their names.

“I just tried to lay the groundwork so that they could start off on the right foot,” Rivera said. “All too often we see that people who are less fortunate or in a socioeconomic situation go down the wrong path, through no fault of their own. It’s purely circumstantial and environmental.”

Things became simpler in May of 2019 when Rivera returned to Volusia County to finish med school at the Daytona Beach campus.

“My home became a safe haven,” he said. “My brothers can come in and out as they please and they actually both ended up moving in with me.”

Joshua, a rising sophomore studying finance at the University of South Florida, has a summer job in the Denver area with AmeriCorps. Josiah will be attending to the University of Colorado Denver in the fall, beginning a pre-med track.

Rivera’s ability to achieve academically and clinically on such a high level while tending to his brothers is revealing on a number of fronts.

“The fact that he’s able to handle that and do all the other things he did well is just a tremendous testimony to his own personal strength and resiliency,” Rust said. “The other thing it says to me is there are people who advocate for health equity in the abstract, but never allow it to touch their heart; never engage in compassionate care at a level that sometimes makes you cry.

“Jason, whether the role he took on with his own family or with his patients, has that sense of heart-connectedness, that empathy and a real sacrificial spirit; a willingness to put himself on the line; Whether he’s taking on a family role that is tremendously challenging, or speaking up in settings where other students would be intimidated and worried about their future. In all of those settings he has shown a level of sacrificial courage and strength that I think we could all learn from.”

As the Daytona Beach campus student representative for the Volusia County Medical Society since 2019, Rivera has been championing the need for a needle exchange program, which had the approval of the state legislature with a county-by-county opt-in. His growing frustration following unsuccessful attempts to get an audience with the county commissioners and city council members led him to address the Volusia County Medical Society.

“I stood up and said, ‘I think we need to talk more about opting in for the needle exchange program,’” Rivera said, recounting the moment. “We have the highest opioid death rate of any county in Florida and we’re not doing anything about it. And we know needle exchange programs work in terms of harm reduction, and they’ve been established for over 30 years. The first needle exchange program was actually implemented in New York back in the early 80s and here we are in 2020-2021 debating whether Florida should do it.”

Rivera was unrelenting, despite a doctor on the board publicly dismissing his passionate plea.

“I spent a couple of weeks with the medical examiner back in February and at least every day we had one overdose,” he said. “I ended up putting an article in the local newspaper on it, [including] the data behind needle exchange, because if they don’t want to listen to me, then we’ll turn to the public and maybe the public will listen.”

“I love finding students who have that passion and that idealism and that ability to care for real people and, at the same time, the ability to work for health justice and health equity,” Rust said.

Rivera is equally excited about putting his clinical skills into action in Denver.

“I feel very confident beginning residency because Florida State did a great job of preparing us to be clinically excellent,” he said. “Our regional campus model and our one-on-one student-to-faculty ratio, with no other students or resident around, really gave us that hands-on. I was first-assist in every surgery, so I got a ton of experience. I delivered 13 babies.”

He will be making his next delivery at the end of a 27-hour drive in a 26-foot moving van – his car in tow – with his wife Kimberly and brothers following close behind.

“I have a very unique opportunity at the University of Colorado,” Rivera said during a break between packing. “I will be doing a dual residency in both family and preventive medicine in four years, and they will be giving me an MPH [Master’s in Public Health] in the process for free, so when I graduate I will be double-boarded in family and preventive medicine with an MPH.

“I hope to use all of that to really take an upstream approach to health care and look at these issues on a grand scheme. ‘What can we do to impact the most people in the greatest possible way?’”