Together while apart, FSU’s newest physicians graduate into an unprecedented medical landscape 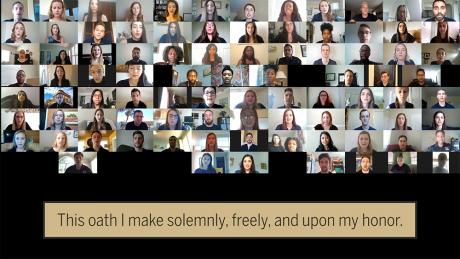 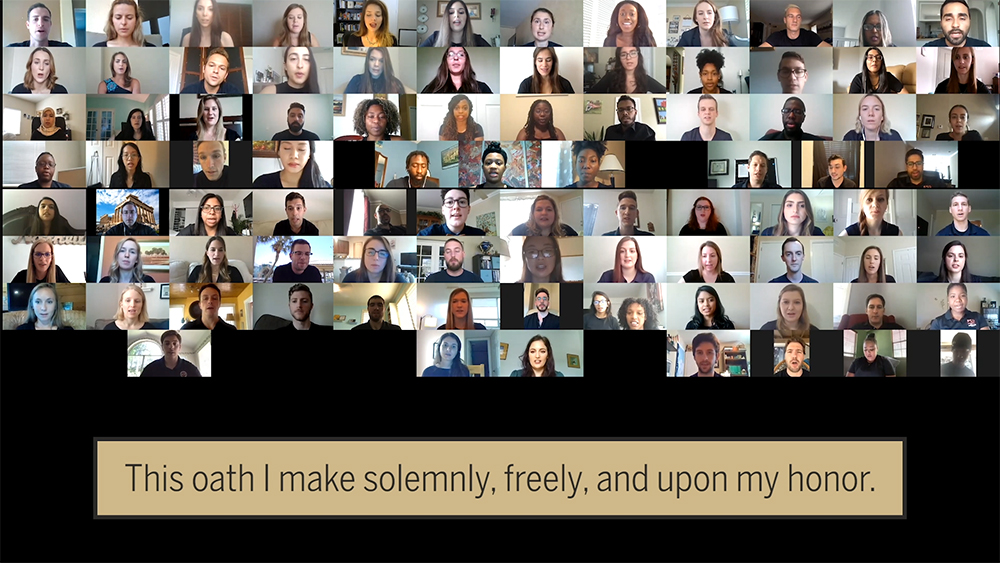 One-hundred and fifteen new physicians from Florida State University are a step closer to joining hospitals across the country eager for new recruits in a battle against the COVID-19 pandemic. How much they’ll help in the early stages of residency training will vary from place to place, but clearly the transition from medical student to hands-on physician has taken on a new significance in 2020.

FSU’s 16th class of M.D. students graduated Saturday in a virtual ceremony surprisingly emotional in light of the participants being mostly isolated from each other and from their faculty and mentors. The ceremony also included 11 students receiving the degree of Master of Science in Biomedical Sciences - Bridge to Clinical Medicine. Those students are now part of the Class of 2024, scheduled to begin medical school at Florida State on May 26.

Instead of being hooded by faculty physicians, the graduating doctors were given an opportunity to share a video of themselves being hooded by a family member (for a few, their own child), friend or, in some cases, the dean of the regional campus where they spent their third and fourth years of medical school.

Those videos, along with a video in which dozens of students independently recited the Hippocratic Oath, became the star of the show. There were touching scenes of parents hooding their child-turned-physician and embracing in a moment that did not need to be live and on stage at Ruby Diamond Concert Hall – where the medical school’s commencement ceremonies normally take place – to convey the feelings being shared. If those parents weren’t a little teary-eyed at the time the video was recorded, there’s a good chance they were upon seeing their child’s name called for their walk across the virtual stage.

Such images provided an intimacy that’s more difficult to experience from the audience of a packed concert hall.

Besides, parents and other family members and friends usually are not permitted to be part of the hooding ceremony. Not unless one of those parents or siblings already is a physician on the FSU faculty.

That was one of the positive outcomes from the medical school’s necessitated switch to an online event.

“Another benefit of a virtual graduation is being able to include a lot more family and friends than who would have actually been able to travel to Tallahassee,” said Eric Walker (pictured left) from the apartment he has lived in as a student at the Orlando Regional campus.

On Friday, a day when graduating students normally would be in Tallahassee to be reunited with classmates for campus regalia photos, a rehearsal, the student awards ceremony, and a joyful class reception in the medical-school atrium, Walker instead was driving to Miami. He moved into a new apartment in preparation for the start of his residency training in family medicine at Jackson Memorial Hospital.

He experienced graduation from his laptop computer, connecting with family members and friends using social media – virtual hugs instead of real ones.

“We’re going to celebrate when the time is right and we can all be together again,” he said. “Right now, it’s just been hard to make sense of everything that’s happening, especially when you’ve dreamed of graduation day for so long.

“You know, sometimes our plans we write in ink should actually be written in pencil.”

Or maybe digital fonts are the way to go.

The Class of 2020 received well over 10,000 engagements related to graduation on College of Medicine social media through Sunday and untold multitudes more on their own private pages. The commencement video alone received more than 2,000 engagements on Facebook, but was also available for viewing on YouTube and through the College of Medicine website.

The commencement video was being viewed live on more than 850 screens across all platforms on Saturday morning, most of those no doubt including multiple audience members in family living rooms and wherever graduates were huddled with family and friends.

College of Medicine Dean John P. Fogarty recorded his graduation ceremony welcome remarks in an empty atrium well ahead of the scheduled event, as did Florida Surgeon General Scott Rivkees, who was chosen to serve as the commencement speaker.

FSU President John Thrasher also recorded perhaps the most important words the students were waiting to hear, wherever their location and by whatever means they could be delivered: “By virtue of the authority vested in me by the Florida Board of Governors and the Florida State University Board of Trustees, I hereby confer upon each of you the degree of Doctor of Medicine."

At that moment, the Class of 2020 transitioned from a group of excited students to physicians, eager for the next phase of their medical education, which will include 3-7 years of residency training and additional years of fellowship training for many.

After each graduate was ‘called to cross the stage’ by Senior Associate Dean Alma Littles or Associate Dean Rob Campbell, their personal video or photograph was shared on the screen to replace the lost moment when they likely would have trembled beneath regalia before embracing their faculty and university leaders on stage at Ruby Diamond.

They will receive their diploma in the mail.

Chair of Clinical Sciences Jon Appelbaum, selected by the class to administer the Hippocratic Oath (aka, the physician’s oath), asked the new graduates to recite after him. But as he called his lines on video, the synchronized response came as a virtual echo of individual graduate video clips combined into one.

Fogarty, who has presided over 12 of the college’s 16 M.D. commencement ceremonies – but never like this – set the tone.

“While I know this is a disappointment to each of our graduates, please know that it is difficult for your faculty and staff, too,” he told them.

“We greatly enjoy seeing the large family delegations cheering your accomplishments, seeing you walk across the stage – knowing how far you’ve come, the struggles you’ve had, our pride in knowing that you are now a physician and maybe even that we had a small role in helping you achieve this incredible goal.

“The Class of 2020 has had its share of challenges: Zika, Ebola, hurricanes Irma in 2017 and Michael in 2018 and now COVID 19.  None of these kept you from your goal and your class stepped up time and again to the challenges.”

View more videos about the College of Medicine