‘I always knew I’d be going back’ 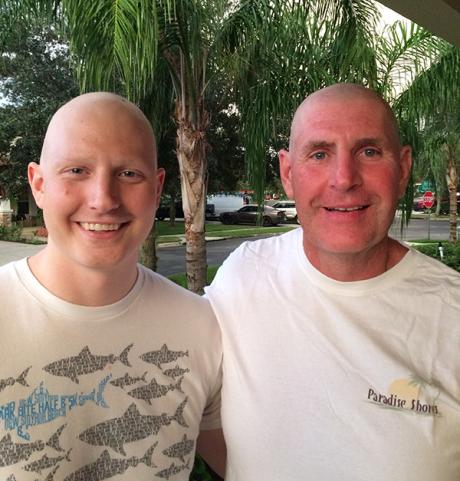 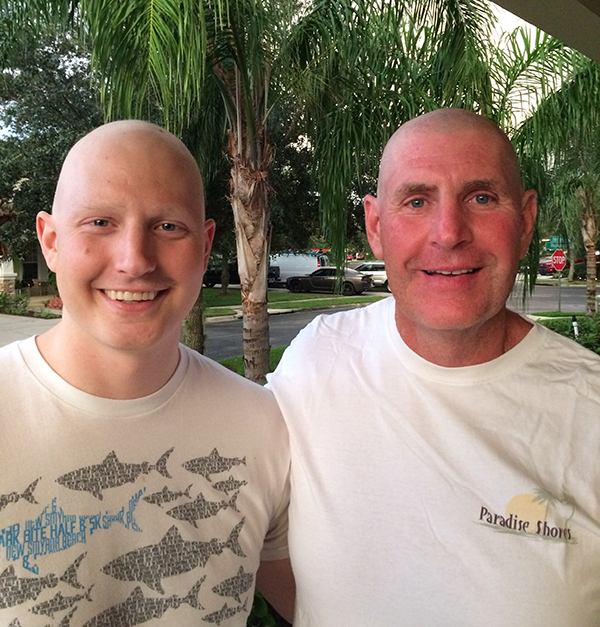 The day Cody Canavan was supposed to start his surgical rotation, he ended up in surgery to get a blood clot removed.

“I got transferred to AdventHealth in Orlando, which is one of the hospitals where we rotated,” said the Florida State University medical student, once an aspiring surgeon. “The rest of the group of students on my rotation were starting surgery – and I was in the cath lab.”

Nearly three years later, after being diagnosed with leukemia and spending 93 days in the hospital, Canavan is finally ready to resume his third year of medical school. And he has a new career in mind.

“I originally planned on doing orthopedic surgery,” he said. “But after going through all that, I plan on going into hematology and oncology. I want to specialize in bone marrow transplants.”

Hematology and oncology physicians specialize in blood diseases and cancers. Canavan had acute lymphoblastic leukemia, a cancer of the blood and bone marrow that affects white blood cells. 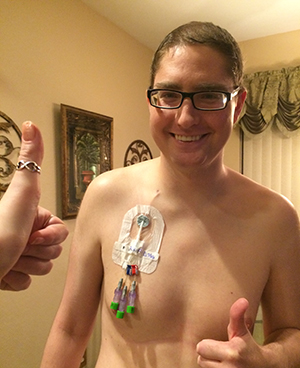 “I keep telling my doctor I’m going to take his job,” he laughed. “It just feels like what I should be doing.”

Before his diagnosis, Canavan was a newly minted third-year medical student at the Orlando Regional Campus. He had just completed his first clinical rotation – where FSU students get out of the classroom, work one-on-one with physicians, see patients and test their knowledge.

Canavan was looking forward to his next rotation. All that stood in his way was a shelf exam – which tests students on the clinical knowledge gained in their clerkship rotations.

“Throughout the first rotation, I was getting some weird symptoms,” he said. “I was really tired. But as a medical student I wrote that off, because of course I’m tired.”

He recalls frequently feeling feverish, having chest pains, and waking up in the middle of the night with nausea, night sweats or a cough.

“I got increasingly worried,” said Katelyn Harrison, Canavan’s girlfriend and an M.D. student in FSU’s Class of 2020. “I could just kind of tell he wasn’t himself.”

Then came the pain in his leg.

“As a medical student you’re like, ‘Yeah, it’s probably a blood clot,’” he said. “But also, ‘There’s no way it’s a blood clot. I’m 25. I’m active.’” In fact, both he and Harrison were training for the New York City Marathon.

The morning of his shelf exam, Canavan struggled to get out of bed, didn’t eat anything but still showed up for the exam. “And got honors!” Harrison quipped.

Immediately afterward, though, he and Harrison spent the night in the hospital.

After a CT scan, the doctors confirmed the blood clot in his leg, and also discovered small clots in the arteries of his lungs. After more tests, including a biopsy of his bone marrow, they confirmed it was leukemia.

Ten days after his shelf exam, he began chemotherapy.

“It just escalated really quickly,” said Harrison. “One minute, we’re taking an exam and we planned to go to the movies that night, then they’re rolling him back in the wheelchair from getting the [tests] and his face was completely different. He said it hurt to breathe.”

“Every single thing I did leading up to that point was to get to medical school,” he said. “It was my focus in high school, it was my focus in college, it was my focus during the year I went off to do my work in a medically related field to try to get into med school. Then I get there, finally made it, well on my way, and it kind of got yanked out from under me.”

With a bone marrow transplant, the body’s immune system and natural defenses it’s built up over time are eliminated, including immunity from vaccines you get as an infant. About a third of the transplant patients die from infections, rejection or other complications.

“I was susceptible to everything,” said Canavan, who received the transplant from his dad in October 2017, about three months after his diagnosis. “We just kind of took the mentality that we’re going to be fine and we’re just going to plow through that,” he said.

He tells his story lightly, often with a smile.

“I couldn’t even have a normally cooked steak, which is probably the worst part,” he laughed. “Everything had to be well-done.”

While spending close to 100 days in a semi-quarantine following his transplant, Canavan didn’t lose sight of his goals. In his time off from med school, he received a graduate certificate in infection control through online coursework at the University of South Florida.

“I always knew I’d be going back,” he said. “It was just the timeline of when.”

“I’m apprehensive but definitely more excited to get back and start than anything,” said Canavan, who started med school with the Class of 2019. “It was great watching all my friends and classmates graduate and become physicians. But looking back, it’s also been difficult at times … having to wait and kind of miss out.”

“It’s obviously something I was hoping we could experience together, but even though we can’t it’s been wonderful having Cody’s support,” she said. “He’s always been my inspiration to continue through medical school, because there were a lot of times this year I felt like I was falling apart. Remembering all that he’s gone through is a reminder of why we do this.”

Canavan is on track to rejoin the Class of 2022 in Orlando later this year.

“I do feel a little unprepared, but also having done second year into the third year, everybody is a bit unprepared,” he added. “It’s a drastic change going from studying nonstop, thinking you know all this stuff, then you get into the clinical portion and you try to explain the intricate biology to your preceptor –and he rolls his eyes and walks into the patient room because you’re taking too long.” 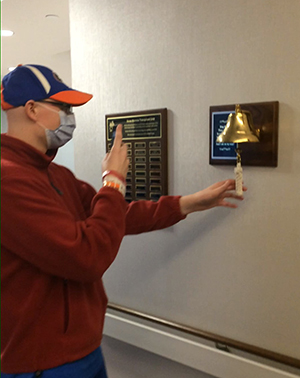 Harrison, who will graduate in May and recently matched in orthopedic surgery at WellStar Atlanta Medical Center, thinks Canavan will be ahead of the game when he returns.

“As someone who spent a lot of time sitting in that hospital room, you understand small ways you can relate to your patients and what it’s like from that perspective,” she said. “Things like walking into a patient room at 5:30 in the morning and turning on all the lights, talking loudly, poking and prodding. You kind of remember how much it sucks to be in there. Maybe you go in with your phone flashlight, and talk with a lower voice. It’s almost ingrained in us.”

Now, after one final vaccination, he can look forward to that surgery rotation after three years. And resume training for a marathon.

“I just did my first half marathon since recovering,” he said. “I feel great and healthy and ready to get back to work.”

Through May, Canavan is participating in the Leukemia & Lymphoma Society’s Man and Woman of the Year, a philanthropic competition to support blood cancer research. “I just thought it would be a good way to give back to that cause that I've basically decided to dedicate my life to,” he said. Click here to learn more about his campaign and donate.