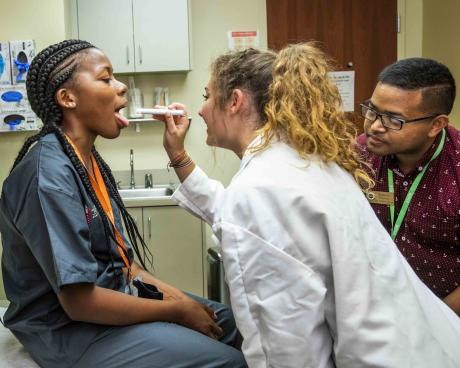 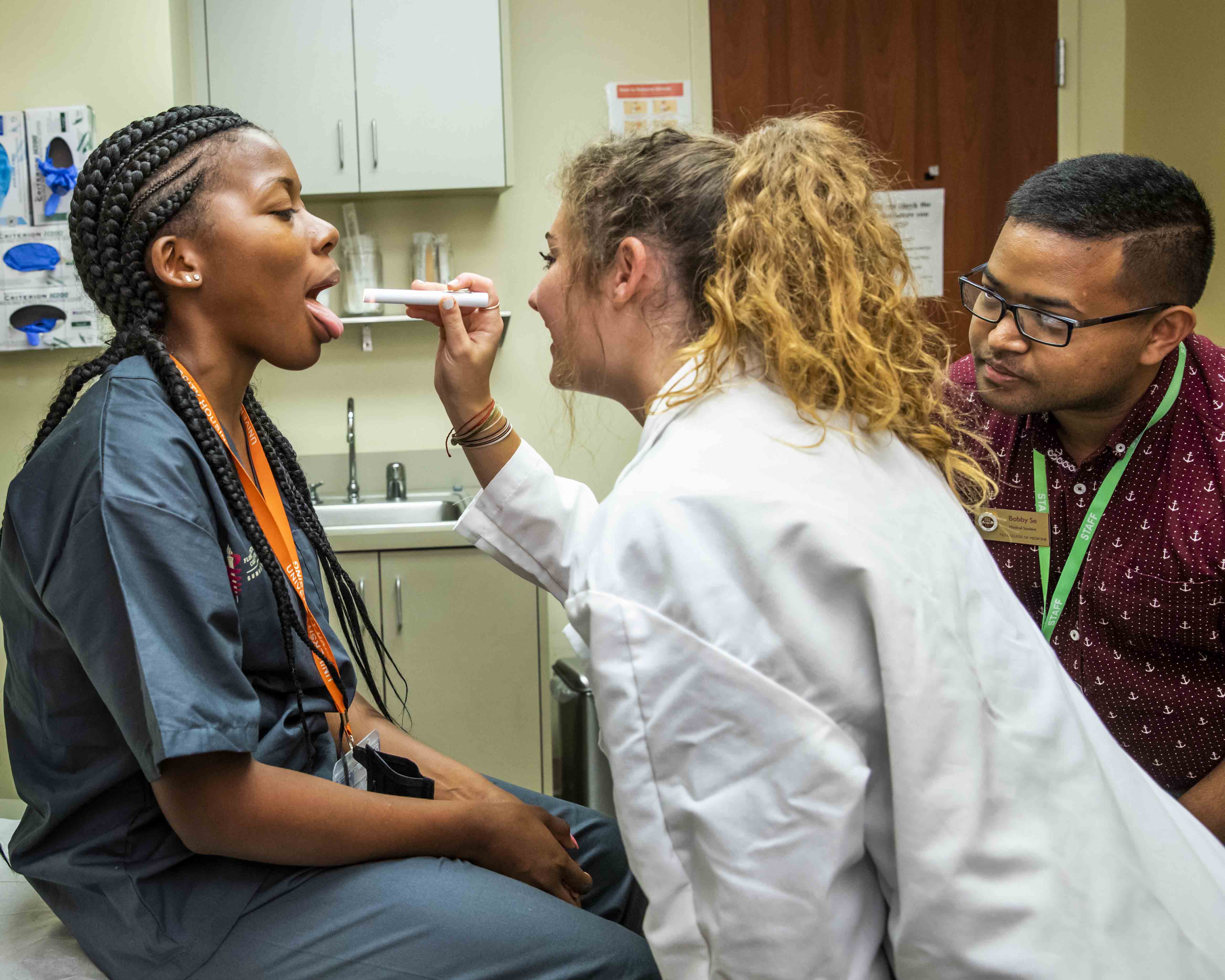 SSTRIDE, a pipeline program established in 1993 to encourage and support underrepresented minority and rural middle- and high-school students to consider careers in the sciences, has been around longer than the Florida State University College of Medicine.

More than 3,000 students have completed SSTRIDE or its university-level companion program, USSTRIDE. Now a scholarship fund for graduating SSTRIDE high school seniors has been established through the FSUCares medical student organization.

FSUCares is devoted to helping the underserved and underprivileged population, both locally and internationally, providing medical care, education and counseling to people who would not otherwise have access to care while at the same time providing an interactive, clinical learning environment for FSU College of Medicine students.

“Ever since I first became a SSTRIDE mentor back in 2018, I fell in love with the program and all that it does for minority and underserved students across the state of Florida,” said Neha Saini, a member of the M.D. Class of 2024  who served as president of FSUCares last year. “I had the chance to teach for SSTRIDE for a whole year in Gadsden County and it was one of the most meaningful experiences of my career.”

Saini stayed connected with SSTRIDE (Science Students Together Reaching Instructional Diversity & Excellence) and through her role as FSUCares president found a way to further support the program.

“We worked on several projects, one of which included expanding the reach of FSUCares to all our regional campuses,” said Saini, whose group recruited third-year medical students and advisors at each campus.

“Since SSTRIDE is connected with schools all across the state of Florida, I thought the FSUCares SSTRIDE Student Award Fund would be a great project for our team to embark on as our first collective effort that included our regional campuses.”

Initially hoping to raise $3,000 and award three $1,000-scholarships, the fundraising campaign expanded its reach as the medical school’s featured project in FSU’s ‘Great Give’ – a university-wide day of giving – and raised $8,310. The total included several generous donations from SSTRIDE alumni, many of whom have gone on to careers in medicine and related fields.

FSUCares members created the scholarship application, which was made available to all SSTRIDE graduating seniors. Applicants who had been accepted to FSU were eligible and were required to follow through with attendance in order to receive the scholarship.

“We had six amazing applicants,” said Jodi Truel, the Sarasota-based SSTRIDE director for the southern region of Florida. “Since this was the inaugural year of the scholarships and we had enough money, we decided to award scholarships to all six applicants. Moving forward, it will likely be just one or two a year, depending on the applicants.”

FSUCares emphasized in fundraising efforts that the scholarships would be especially important for students in offsetting the expense of moving to Tallahassee.

“Transitioning from high school to college can often be a very financially straining time,” Saini said. “Financial aid is usually not made available to students until after they arrive on campus, so the initial costs of moving, as well as other expenses, can serve as a real barrier that keeps many students from pursuing a college education.”

The remaining $2,310 will remain in the fund with hopes of eventually endowing the scholarship through an annual campaign.

“Neha was quite clear she wanted to make sure this was not a ‘one and done’ project,” Truel said. “This is her legacy.”

“As freshmen, they will transition into SSTRIDE Connect, and then into USSTRIDE for their sophomore through senior years,” she said. “A thousand dollars isn’t a lot, but it’s a token of our commitment as an institution to continue to be there and support them in their journey.”

Photos by Colin Hackley for the FSU College of Medicine

Ty’Anna attended the SSTRIDE Pre-Med Mentoring Program at Booker High School in Sarasota.  She plans to major in exercise physiology and become a physician specializing in sports medicine. She graduated with a 4.47 GPA and participated in varsity basketball as well as track and field, becoming passionate about sports medicine when she tore her ACL and Meniscus. She was inspired by the care she received and the recovery she made. Basketball has encouraged her to improve her communication, attitude, sportsmanship, leadership, and life in general.

Arianna attended the SSTRIDE Program at Immokalee High School.  She plans to major in Social Work and intends to become a foster care social worker or counselor in the future.  Arianna graduated with a 4.0 GPA and participated in color guard, as well as working with the Guadalupe Tutor Corps program for the past four years, tutoring at elementary schools in her area.  She wanted to keep these young students’ dreams alive, show them that they can do great things, and anything is possible with their education.  She is passionate about helping people in any situation around the world.

Salihah also attended the SSTRIDE Pre-Med Mentoring Program at Booker High School.  She plans to major in exercise psychology and become an OB/GYN or psychologist.  Salihah graduated with a 4.78 GPA and was a student ambassador for BEYA STEM Career Days, as well as a member of the varsity dance team.  She volunteered summers at Sarasota Memorial Hospital and STEM Camps for kids, and  is interested in making a difference in the fields of minority women’s health and teen mental health.  Displaying acts of kindness and being attentive to all populations has been a heartfelt passion of hers.  Salihah has been accepted to the FSU University Honors Program and FSU College of Medicine Honors Medical Scholars Program.

Merissa attended the SSTRIDE Program at Crestview High School in Okaloosa County. She plans to major in clinical professions and become a family medicine physician or a physician’s assistant.  Merissa graduated with a 4.46 GPA and was a member of the Key Club, National Honor Society, and Health Occupation Students of America (HOSA).  She has numerous hours volunteering in her community at places including the animal shelter, elementary schools, and the local roller rink.  She is currently EKG-certified and just recently passed her Emergency Medical Responder Certification test as well.  Merissa plans to own her own medical clinic that does not require insurance to be seen by a doctor and caters to those suffering financial hardships.  In her free time, she loves to read and is passionate about books and immersing herself in the characters she reads about.

Josica also attended the SSTRIDE Program at Immokalee High School. She plans to stay on the STEM track and major in criminology with hopes of becoming a lawyer in the future.  Josica graduated with a 4.7 GPA and is active in tutoring at local elementary schools in her hometown.  Last summer, she attended a Public Safety Telecommunicator course and logged 232 hours of class and hands-on work in her community.  She is a dedicated student who values her time in SSTRIDE and the STEM opportunities she has been given.  She is passionate about helping others through translating.  Josica speaks three languages fluently (Haitian Creole, Spanish and English).  Her parents immigrated from Haiti and found themselves surrounded by a new culture and a language they knew nothing of.  She hopes to help others in this same situation in her future career.

Mayah also attended the SSTRIDE Program at Crestview High School. She plans to major in nursing and become a neonatal nurse or traveling nurse.  Mayah graduated with a 4.5 GPA, was the senior class president, captain of the varsity swim team, and played varsity soccer and tennis.  She also participated in HOSA, student government, Fellowship of Christian Athletes, Key Club, and the marching band.  She volunteers with her local animal shelter and at City Hall.  She works as a Registered Pharmacy Technician and has completed her Patient Care Technician Certificate.  Mayah would like to one day use her medical skills on mission trips to help provide healthcare and vaccinations in areas without access to healthcare. She is extremely passionate about her faith. Her love for medicine grew from her love for God because it showed her how amazing his craftmanship is. She has always admired how every part of the body is working in harmony with a purpose.