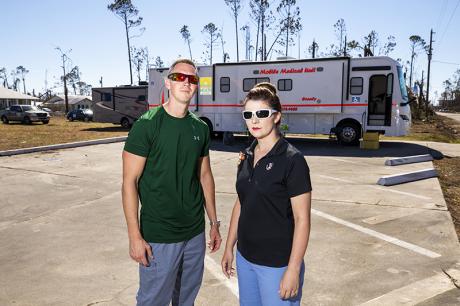 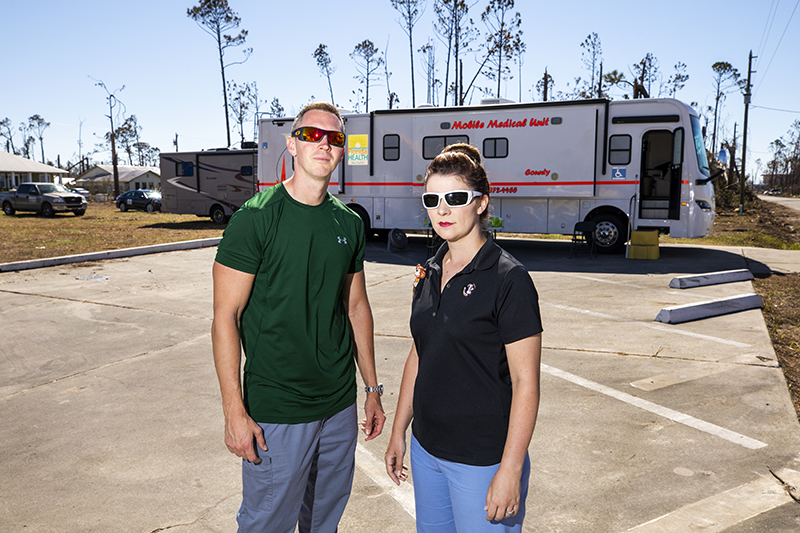 Bixler and James (both M.D., ’11) grew up in the Panhandle: he in Chattahoochee and she in Port St. Joe, where they live now. She practices family medicine, while he practices emergency medicine. With Port St. Joe under mandatory evacuation, they weathered the storm farther inland. Their home suffered roof damage. Their town, though, was clobbered.

JAMES: I got there Friday and didn’t leave until the following Monday morning. The two hospitals in Panama City – Bay Medical and Gulf Coast – both had significant damage, and both were functioning as freestanding ERs.

The hospitals had zero power, zero water, I mean nothin’. And still trying to treat people coming in. The minute the storm passed through, it was just a complete barrage of people. Utter chaos.

There were tons of DMAT teams: Disaster Medical Assistance Team, under the Department of Health and Human Services. They had tents set up outside of both hospitals. I mean, these things are legit. They’re staffed with ER doctors, trauma doctors, pharmacists, they have their own pharmacy in there, they've got nurse practitioners and PAs, nurses, paramedics, techs. They can have mobile ICUs, they can have mobile ORs. Whatever you need, they can do it.

They were essentially treating the walking wounded and siphoning those people off to keep the ERs open for the critically ill. Because there’s no way our ERs could have handled people walking in and needing medication refills, AND the heart attacks, AND the traumas and all that. I was pretty blown away by what they had the capability to do.

You had these contracted federal agents under the Department of the Treasury who had assault rifles all over the hospital. The security was unbelievable.

As people cleaned up the storm damage more, you got a lot more people falling off roofs and chainsaw accidents. There was a young girl who fell about 10 feet off a roof. She came in looking fine. Then about 10 minutes later, she became cool, clammy, a little bit less responsive, and all of a sudden she had a blood pressure of 60. She was bleeding in her abdomen. So we started hammering her with blood products and doing our mass transfusion protocol, and for a little bit there she wasn’t getting better. In a perfect world, you just take this woman right over to the OR and see what’s bleeding. Well, we didn’t have that luxury. It got to the point our trauma surgeon was putting on his booties and calling anesthesia in and getting ready to use a makeshift OR. I told him, “I can hold a retractor if you need me to.” But by the grace of God, literally as he was putting his boots on, her pressure started slowly coming up. We were able to stabilize her and fly her out to the next closest trauma center. Disaster medicine is a different beast, for sure.

Being ER-trained, we were almost the only doctors in Panama City who still had a job. A lot of specialists out there have nothing to do. We even had some clinic doctors out on the beach ask if they could do shifts in the ER. It made me feel very fortunate that I did what I did. We are very comfortable caring for the sick with limited resources. We know how to look at a patient, determine what they need immediately to at least stabilize them. We’re kind of a jack of all trades and masters of resuscitation.

BIXLER: Port St. Joe was in the Stone Age. Everything including land lines, radio network and the 911 system was completely taken out. All communication was face to face. There was not a single home without at least minor damage. Over 80 percent of businesses and homes were either major damage or total loss.

We are extremely grateful to have a home. Two-thirds of our community went underwater. We had a functional ER only. I was doing face-to-face home visits and working to get our pharmacies up and running. Both hospitals in Bay County-Panama City were severely damaged and had to evacuate all their patients. They only had bare-bones ER at both locations. Mexico Beach is considered ground zero and it is only 15 minutes from our home. Whole streets are missing entire houses.

Every bit of communication that you wanted to do was all face to face. Even the ham radio operators, what you typically rely on in this type of crisis, couldn’t really function. People would go to tops of bridges and put out a distress call. Or post on Facebook, “My family member’s running out of medication.” We were able to have an internet connection in the Emergency Operations Center. The health department was getting those distress calls and distress posts, but there was no way to call that person. So you wind up with an address and have to send somebody out to go check on ’em. For the first two days back, that’s essentially what I did.

We had a gentleman that needed kidney transplant rejection medicine. He was going to be running out in 72 hours. We tried to coordinate: 1 – What is his actual medicine need? And 2 – Where do you get it? I mean, every pharmacy between here and Marianna had been hit.

So a lot of that day, Saturday and Sunday was spent trying to locate a pharmacist that could open the store and see if it was intact, and then getting in touch with CVS to see if they had the ability to open. By Sunday, they had brought in a pharmacist and we were able to open CVS. Bi-Rite, one of our mom-and-pop pharmacies, locally owned, was able to open on an emergency basis. “If you can bring in your bottle, we’ll give you three or four days of your medicine.”

Keep in mind: During this time, nobody had consistent cellphone service. We had to come up to the top of the bridge. It was lined with people trying to do phone calls. No landlines. Most of the city still did not have power. We had water by that point, but definitely couldn’t drink it. And sewer was working. But that was just for St. Joe proper. Not the beaches.

It’s been interesting to hear my nurse talking with insurance companies that have no clue about how things are down here. I remember hearing her have a conversation the first day we were back. We didn’t have internet. She was trying to have a conversation with what little cellphone signal she had, and she was saying: “They can’t send records – the specialist’s office doesn’t exist anymore…. I can’t send records – because I don’t have a fax machine…. With all due respect, ma’am – have you watched the news!?”

Being able to practice without access to labs, or even X-rays. That’s how the first week was. There’s no medical textbook that can prepare you for something like this. There’s no class. You have to have faith in your training.