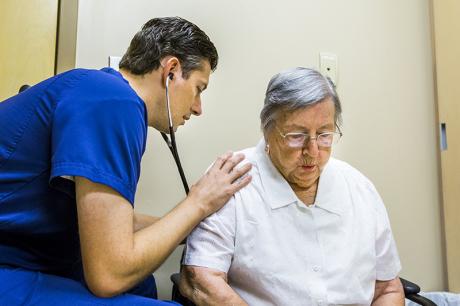 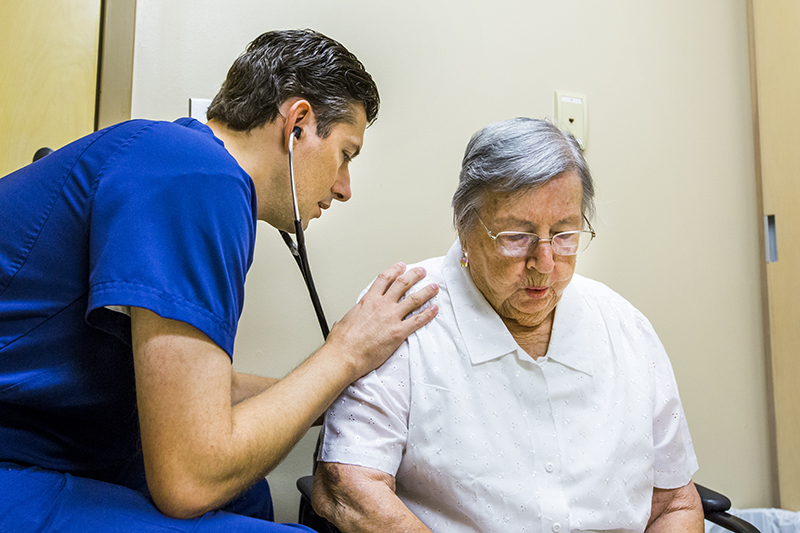 Albritton (M.D., ’07) grew up in Marianna and has practiced family medicine there since completing his residency. This interview took place Dec. 7, two months after Hurricane Michael, so he could evaluate its impact on his hometown.

I’ve had a dozen or more patients move out of town. Their houses were destroyed. A lot of the homes here are older, and many people couldn’t get insurance. Or they lost a job because of damage from the storm. I have numerous patients still living in hotels or travel trailers. One family, a husband and wife and their three children, actually have two other families living with them. They’re living in a total of two rooms. Three families, a total of seven kids, in two rooms. Because the rest of the house is destroyed. The other two families’ houses were demolished. They’re cooking on a camp stove.

We reopened the office seven days after the storm. In the first three weeks, the number of patients who came in because of anxiety issues was tremendous. One of them is 62 and owned about 300 acres of planted pines. That was his retirement. All of his retirement, gone. He came in, not sleeping, had lost probably 8 or 10 pounds, trying to figure what he was going to be able to do now.

On that Wednesday morning, my office was closed. I came to the hospital probably around 10. Most of the physicians came in to round on their patients. Then they checked out their patients to me.

Around 1 p.m. the winds started to get sustained above 40 mph. Once they do, EMS will not go on any calls, because the wind can tip over the ambulance. Our hospital administrator had been through an actual disaster with significant flooding of a hospital when he was in Iowa, so he was very well prepared. We had two shifts of every staff in the hospital, knowing that we may be there a long time. Most all of their families came with them. We had 42 patients, and many of their families.

The storm really started getting bad about 3 or 4 p.m. It got to the point where you couldn’t see 10 feet out the door because it was literally a white-out condition. For all intents and purposes, the eyewall that came here was a 30-mile-wide F4 tornado that sat here for four or five hours. The trees snapping one after another sounded like bullwhips. Snap, snap, snap, snap, snap, just seconds apart

We had to move every patient into the hallway, away from windows. We lost power around 3 or 4. The backup generators came on. We started developing leaks. At this point, it didn’t matter what your job title was. If you needed to grab a bucket, grab a bucket. If you needed a mop, get a mop. It was amazing to watch.

The eye of the storm passed right over us. By around 5 or 6, we lost our water because one of the city’s pump stations failed. Our air-conditioning unit is water-chilled. So once the water in the tank ran out, the air conditioner failed. That was 7 or 8 p.m. It started to get really hot really fast. We started discovering more and more leaks. Buckets everywhere. [They were a blessing in disguise. Later on, when the water shut off, they’d use that rainwater to flush the toilets.]

The state Emergency Operations Center contacted Tennessee. They deployed 15 to 18 ambulances that drove all night to get to Marianna. I was the only physician in the facility, so I was up all night filling out the paperwork required to transfer 42 patients. Nurses gathered radiology reports, lab studies, so we could put individual packets together for each patient when we rolled them out the door. Our nurses were phenomenal. The whole staff was phenomenal. When daylight broke, we were going to be ready.

These folks from Tennessee came down U.S. Highway 231 to Highway 73, which connects to Marianna. They only made it about a half mile before they hit the significant damage. They were stuck. This was around 3 a.m.

A gentleman who lives in this area owns a bunch of heavy equipment. He had evacuated with it to Enterprise, Alabama. In the middle of the night he decided to come back to Marianna. So he drove up on all these ambulances and basically got out and said, “Hey, anybody here know how to drive a front-end loader?” One guy said, “Yeah, I know how.” So these guys cut their way all the way to Jackson Hospital by 8 a.m. They probably had to go seven to eight miles. Unbelievable.

Thanks to satellite phones, the hospital knew they were coming. We fit as many as four people in an ambulance. It took only 2 hours and 12 minutes to load up all 42 patients. We had no idea where they were going. Neither did EMS. Emergency Operations basically told them: “Get them out to Interstate 10. We’ve cleared a path. Start heading east. When communication’s good enough, we’ll tell you where to go.” The vast majority ended up in Gainesville at the University of Florida.

I finally left the hospital maybe 3 p.m. Thursday to see if I could get to my own house. [No damage, even though trees had landed on all his neighbors’ houses.] We evacuated the hospital, apart from keeping the emergency room open for life-threatening emergencies. By midday Saturday, water was running again. So we started slowly readmitting people. We had to do a “terminal cleanup.” The OR had to be resterilized. By Sunday afternoon we were fully functional again.

It’s still hard for me to believe this happened to our town. It looks like you took a giant chainsaw and just chopped every tree off 10 feet off the ground.

I talked to numerous people from FEMA. And numerous of them, in separate conversations, said they’d never seen communities like this. “Often when we go to a natural disaster, people just sit and wait for us to do something for them. When we got into this town, we couldn’t believe the number of people who had chainsaws in their hands, had tractors, heavy equipment, helping their neighbors out, doing whatever they could to just get things moving in the right direction.” It’s the heart and the spirit of the people here.

We have such a small medical community. It makes me proud that I did come back here. Because the way I saw those people work on the day of that storm was phenomenal.