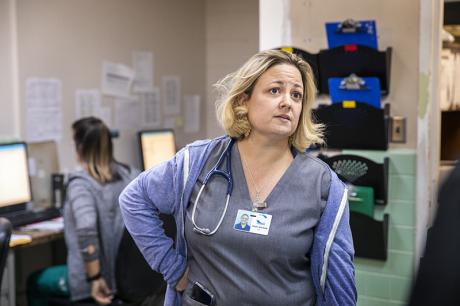 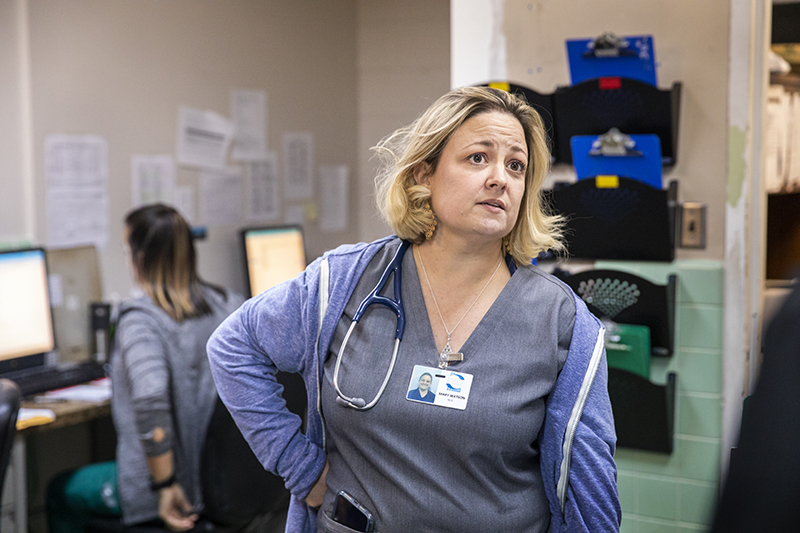 Watson (M.D., ’09) grew up following her father, College of Medicine neurologist Robert Watson, during rounds at UF Shands. She’s practicing emergency medicine in a small-town hospital with far fewer resources, but she says the medical team’s loyalty to the community is unmatched. For much of the time right after the storm, she was the only M.D. on duty. Nurse Paige Tolley, R.N., said Watson “went from a girl that said ‘I don’t do bugs and I don’t do sweat’ to kicking down doors. You could see her pouring her whole heart into it.”

We thought we were going to have a generator that would run the entire hospital. But we figured out Tuesday that the generator would only run the ER. So we had to transfer all of our inpatients to outside hospitals. And late Tuesday we heard that the storm was going to be at least a Category 4.

Wednesday morning I came on shift at 5:30 or 6. We continued to transfer patients as needed until about 11:30, when the bridges closed. We were lucky we had three EMS guys stationed here.

Some people came here for shelter, because you couldn’t get into the shelters. We watched through the windows as the storm got really terrible. Power went out. We went up on the generator, but the generator doesn’t run the AC. There were even lots of frogs jumping around. I don’t know how they got in! It was unbelievable. I don’t do camping, and it was that times a hundred.

I think the scariest moment was when the eye was coming over and we could hear the roof ripping off. And then you could hear the glass in the rooms shattering. Our front door shattered. The devastation is unbelievable. Pictures don’t do it justice.

We never closed our doors. We just kept seeing people. I think they said in that first week we saw approximately 500 patients. Because we were the only hospital. DMAT [Disaster Medical Assistance Team] came in. They brought doctors and nurses to help us see patients here. They even brought a pharmacist with them.

One lady who came in was in labor; we don’t have OB services here. Another lady that came in was diabetic, with ketoacidosis [her body couldn’t produce enough insulin]. She also was a drug overdose. She needed to be intubated. We were able to fly them to Pensacola. A helicopter was stationed here. Ambulance strike teams came to help transport.

Before the cold front came through, I was seeing patients in running shorts, flip-flops and a T-shirt. It was too hot. You couldn’t wear scrubs. [Inside] it felt like it was in the 80s.

[As far as staff M.D.s] It was just me. I also had a nurse practitioner here. So we sort of switched off so we could get a couple hours’ sleep here and there. I averaged maybe two hours a night.

We had all these nurses here who lost their homes. Our EMS crews didn’t know anything about their homes. But everybody just stayed. I could NOT have done it without them, absolutely. The thing about the nurses is they love this place. They love this community. They would do anything for it. The loyalty is something you just won’t see in big cities. They’re fantastic. They’ve made me a better doctor, and they’ve made me a better person.

The first few days it was a lot of injuries either from debris removal, lacerations. There was also a problem with a lot of them needing med refills. Blountstown Drugs is owned and run by John Plummer. He was calling me all the time: “What do you need? What can I do?” Pain management clinics in Panama City obviously got demolished, so a lot of people were coming here needing narcotic refills. Headaches. A lot of dehydration. Before the burn ban was in effect, a lot of people were in respiratory distress.

I didn’t know how bad the city was, I think, until Thursday, when I went to the first EOC meeting. Everything was gone! It was trees upon trees upon trees, stacked. If you look out back, there used to be a tree line. Thick trees. And they’re gone.

Friday and Saturday, they had me go out on search and rescue. We got to kick down doors and crawl through trees.

I reached out to a physician moms group on Facebook because we needed diapers and medicines and that type of thing. And, God bless them, they sent everything I asked for.

I don’t think I’ve ever been so exhausted in my life. But you just suck it up and you keep going. You can’t be scared of things. Utilize whatever resources you have. Lean on the people around you. You have to be calm and be the leader. But that doesn’t mean that you don’t ask for help or you don’t rely on others. Because otherwise you’re going to do a terrible job.