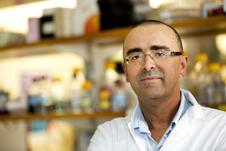 People who have autism, schizophrenia or similar disorders often lack the ability to form secure relationships. If that condition could be addressed at the molecular level, their overall health and quality of life could improve.

Kabbaj studied chemical changes, or “epigenetic mechanisms,” that loosen chromatin structure in the prairie vole – a small mammal that typically forms lifelong bonds after a 16- to 24-hour mating period. Prairie voles, which protect one another from intruders and share parental duties, are often used as models to study social bonding, attachment and love in other animals, including humans.

“Prairie voles develop social monogamy,” said Kabbaj, an associate professor in the College of Medicine’s Department of Biomedical Sciences. “They cheat occasionally, but they always go back to their mate. That’s what makes them unique.”

This pair-bonding is associated with changes in brain chemistry after mating. With a drug injection, Kabbaj and his team were able to produce the same change even though the voles had not mated.

“It’s the first time anyone’s shown any epigenetic basis for partner preference,” Jeremy Day, a University of Alabama at Birmingham neuroepigeneticist who was not involved in the study, told The Scientist.

During the experiment, Kabbaj and his team first paired virgin female voles with male partners for six hours without allowing them to mate. Then they injected histone deacetylase inhibitors into the pleasure center of the brain, or nucleus accumbens. That injection caused the DNA and the proteins surrounding it (histones) to relax, allowing for increased expression of genes related to pleasure.

After the cohabitation period and the injection, the female vole displayed partner preference behavior for her paired male as if mating had occurred.

Kabbaj and his lab then examined the voles’ brains and saw the same neurobiological changes that take place in nature after the normal mating period: increased levels of the expression of genes related to pleasure and reward at the receptors that cause social attachment.

The next question Kabbaj and colleagues want to answer is what mechanisms maintain this bond for life.

“In humans, it has been shown that this social attachment – the formation of this strong couple, a healthy couple – leads to an increase in life expectancy, a reduction in psychological disorders, a stronger immune system and a stronger cardiovascular system,” Kabbaj said.

This advancement in understanding social attachment in light of epigenetic factors will further knowledge about how certain drugs can help those who lack these social abilities, improving their relationships and overall health.

“It should not be long before we can apply these findings to humans, because some of these drugs are used to treat cancer, epilepsy and other diseases already,” Kabbaj said. “One just has to study social attachment in patients treated with these drugs and expand them to other psychopathologies, like autism and schizophrenia. Social bonding may occur.”

The study was co-authored by FSU psychology Professor Zuoxin Wang, as well as researchers Hui Wang, Florian Duclot and Yan Liu, all of whom are associated with FSU’s interdisciplinary Program in Neuroscience. The study was supported by grants from the National Institute of Mental Health.