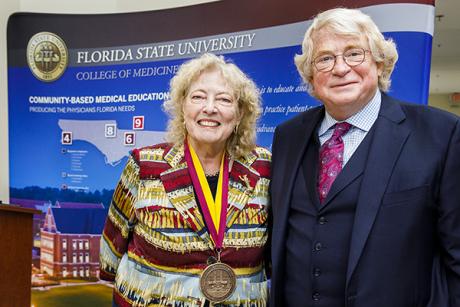 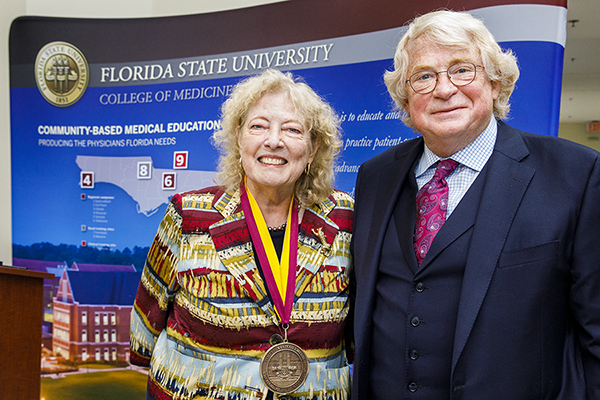 *Hurt’s medal was presented to her, along with her professor emerita status, during a Sept. 2 ceremony at the College of Medicine. A recording of the ceremony is available for viewing here: Myra Hurt Westcott Medal Ceremony, Sept. 2, 2020 and at the bottom of this page.*

It has been 11 years since Florida State University bestowed its highest distinction, the James D. Westcott Distinguished Service Medal. This month, President John Thrasher will honor two new recipients of the award.

The James D. Westcott Distinguished Service Medal recognizes a “person whose distinguished service merits exceptional recognition and whose life and work exemplifies the Vires, Artes and Mores, which the university seeks to nurture in its students.”

Thrasher will award Professor Emerita Myra Hurt, and President Emeritus Talbot “Sandy” D’Alemberte, who died in May 2019, with the medals for their extraordinary contributions to the university.

Hurt retired earlier this year after more than 33 years of service to Florida State.

During her tenure at FSU, Hurt served in multiple roles prior to assuming her most recent post as the College of Medicine’s Senior Associate Dean for Interdisciplinary Medical Sciences.

Hurt’s career has taken her from teaching middle school biology to teaching undergraduate, graduate and medical school students at FSU. She won numerous awards for her work, including the FSU Teaching Incentive Award for Excellence in College Teaching.

Most notably, Hurt played a crucial role in helping to establish the FSU College of Medicine, working to make contacts throughout the state, building coalitions and bridging communication with Florida lawmakers to help found the college in 2000. She also served as acting dean during the school’s formative stages.

In his letter nominating Hurt for the Westcott Award, College of Medicine Dean John P. Fogarty said she made an impact that will endure.

“Dr. Hurt has attained a stature that will leave an indelible mark on FSU and a legacy that will last long after she ceases being a full-time faculty member and administrator at the College of Medicine,” he said. “She is rarely satisfied with the way things are. She’s constantly asking what we can do better.”

D’Alemberte, who was born in Tallahassee and spent most of his life there, served as president of Florida State University for nine years, overseeing a period of remarkable growth and revitalization for the school. He served as dean of the FSU College of Law from 1984 to 1989, and as FSU’s 12th president from 1994 to 2003.

From academic offerings to the campus aesthetic, D’Alemberte’s work on behalf of FSU continues to define the university. As president, he undertook a major campus beautification project, acquired the John and Mable Ringling Museum of Art and established the Seven Days of Opening Nights festival of the fine and performing arts, now known as Opening Nights.

During his presidency, D’Alemberte helped to establish the College of Medicine, as well as create the Center for the Advancement of Human Rights, which has helped victims of human trafficking, torture and war crimes in more than 90 countries.

D’Alemberte was a brilliant legal mind, a dedicated civil servant and a staunch champion for human rights. Upon his death, one newspaper labeled him, “A legal giant who fought for the little guys.”

In a joint letter of recommendation for the award, Professor Emerita of Communication Marilyn Young and Robert O. Lawton Distinguished Professor and Ella Scoble Opperman Professor of Music Jayne Standley, the co-chairs of the FSU Torch Awards Committee, said D’Alemberte was the embodiment of FSU.

“Sandy D’Alemberte’s life represents the best of the ideals to which Florida State University aspires,” they wrote. “His legacy is unprecedented.”

D’Alemberte will be awarded the medal, posthumously, in a private ceremony Sept. 22.