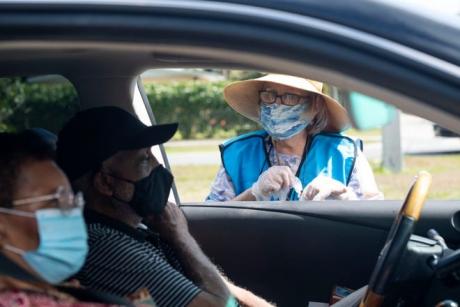 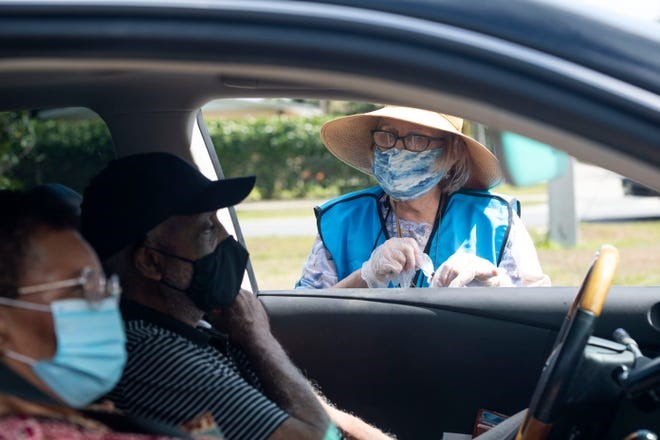 The most heart-rending part of Dr. Heidi McNaney-Flint’s Fridays is the afternoon, when she feels the weight of the South Florida sun, when her feet ache from hours of standing, when every drop of the COVID-19 vaccine has been exhausted.

It’s then that people without appointments drive up to her inoculation station, pleading for any doses that may be remaining. She has little choice but to turn them away.

“That’s hard,” she said. “Every dose is accounted for. There are very few no-shows.”

McNaney-Flint is an OB-GYN who has treated women on the Treasure Coast for nearly 40 years. She works at her private Stuart practice four days a week. On Fridays, she volunteers to administer the COVID-19 vaccine on behalf of the Florida Department of Health office in Martin County.

To do so, she had to join the Medical Reserve Corps, a branch of the U.S. Department of Health and Human Services, consisting of about 200,000 health care professionals who volunteer in hundreds of communities nationwide.

On calmer occasions, they offer such programs as health screenings and youth outreach. In darker times, they’re on the frontlines of natural disasters and disease outbreaks.

Patients who attend drive-thru clinics at the DOH-Martin headquarters on Willoughby Boulevard in Stuart often don’t realize “most everybody out here is volunteering,” McNaney-Flint said.

Many patients already show gratitude for receiving the shot, she said, but they become warmer still upon learning she’s not getting paid for her part in curbing coronavirus spread.

There’s more that surprises them. She laughed, recounting an ice-breaker she sometimes proclaims to male patients: “You’re gonna get to tell your friends that you got care from a gynecologist!”

It was Vivian McCann, a guidance counselor at Bishop Moore Catholic High School in Orlando, who in the mid-1970s convinced McNaney-Flint she was capable of becoming a physician.

The eldest of four sisters, McNaney-Flint naturally took to caring for others. She grew up in the Orlando suburb of Altamonte Springs, believing nursing was the highest rung she’d reach.

She ran with the idea. Without Advanced Placement courses available to her, McNaney-Flint left high school after her junior year, having earned early acceptance to Rollins College in nearby Winter Park.

She double-majored in biology and chemistry, graduated in 1977 and went straight to the University of South Florida in Tampa to study at what is now the Morsani College of Medicine. USF’s curriculum was concentrated at the time, she said, allowing her to finish medical school in three years.

“Never looked back,” she said. “I was in a hurry. I wasn’t going to spend my whole life learning.”

McNaney-Flint had planned to become a pediatrician, a role she figured was suited to female physicians. Then, she fell in love with surgery.

“Surgery was very male-dominated then,” she said. “There were no women mentors. I did not meet a woman surgeon in my medical school career.”

Obstetrics and gynecology gave McNaney-Flint an outlet to practice surgery while caring for babies and supporting women. In the early ‘80s, she completed her internship and residency through the University of Virginia School of Medicine, including two years at Roanoke Memorial Hospital and two at UVA Medical Center in Charlottesville, where she was pleased to see other female residents.

“They were bringing women into the field,” she said. “I got the sense that … women (patients) would want to see women (doctors).”

A 2016 review published in the journal Obstetrics & Gynecology found a 50.2% majority of the nearly 15,000 women surveyed preferred a female OB-GYN. The Association of American Medical Colleges estimates 59% of active OB-GYNs in 2019 were women, a 36% increase from 2007. About 66% of 2019-20 residents in the field who attended medical school in the U.S. and Canada were women, according to the AAMC.

McNaney-Flint moved back to Florida in 1984 and delivered babies at the former Indian River Memorial Hospital in Vero Beach for two years before launching a practice in Stuart. She brought in a partner, then a handful of others, growing the business into what is now Physicians to Women, which also has a Port St. Lucie office now.

She estimates she’s delivered 4,000 babies, some of whom are now patients. Though McNaney-Flint never has delivered the child of a baby she welcomed into the world, she’s treated grandmothers, mothers and daughters in the same family.

In 2000, she stopped practicing obstetrics, once again striking out on her own.

“My practice evolved,” she said. “My patients aged with me.”

The 65-year-old said she’s reached a point financially where she no longer needs to work — not that she plans to stop.

At Christmastime, McNaney-Flint drove from her home in Jensen Beach to Fort Lauderdale, where Holy Cross Health was inoculating frontline health care workers, one of the first groups Gov. Ron DeSantis approved for COVID-19 vaccination. She met the same fate that would plague other priority groups for months to come: more people in line than available doses.

Other attempts proved fruitless. The woman who answered her late-December call to DOH-Martin told her computers were down, to try back the next day. When McNaney-Flint did, she was told appointments were full.

So she took to Twitter, lamenting to @GoHealthyMartin in a since-deleted tweet how difficult it was for even a physician to get immunized. That prompted a callback and she got vaccinated the next day.

Mission accomplished, it was time to give back. McNaney-Flint again reached out to DOH-Martin on Twitter, asking if it could use an extra pair of hands for upcoming mass vaccination clinics. A background check, fingerprinting and training session later, she was part of the Martin County Medical Reserve Corps.

“I’ve always been that provider,” she said. “I get something out of it, and so being able to [vaccinate] just felt right.” Plus, she thought, “What am I gonna do on a Friday?”

Some volunteers want only to be headliners, sticking needles in arms. But there are a host of other duties to be done, including triage, scribing and observation, said Sonya Crosby, volunteer coordinator for the Martin County Medical Reserve Corps.

McNaney-Flint is part of what Crosby calls her COVID team, which as of March 6 had amassed about 75 active volunteers. Each DOH-Martin vaccination clinic has been 90% volunteer-run, she said. The team has contributed to the over 42,300 doses administered to Martin County residents through March 11, according to the health department.

Volunteers are in it for the long haul, Crosby said. As larger clinics continue, she’s building strike teams to deploy in underserved communities as well as inoculate homebound patients.

“I don’t see this ending anytime soon,” Crosby said. “I would say at least another year … we’ve only scratched the surface.”

McNaney-Flint put her left hand on her upper right arm, gripping a chunk of bicep between thumb and index finger. It’s a technique she uses on vaccine patients, a distraction from the needle.

Crosby has witnessed the physician passing along such wisdom to younger volunteers, including Keiser University nursing students.

“She was fabulous at showing them how you draw up the vaccine,” Crosby said. “She’s a great teacher.”

McNaney-Flint taught at the Florida State University College of Medicine regional campus in Fort Pierce for several years before becoming the OB-GYN clerkship director in 2015. Being an educator keeps her young and up to date on advances in the field, she said.

Her role at FSU also allows her to be the mentor to female medical students she never had. When McNaney-Flint eventually retires, “I would still teach,” she said.

She’s a student herself, enrolled in the Florida Master Naturalist Program at the University of Florida Institute of Food and Agricultural Sciences Extension. It helps make up for losing her beloved garden when she moved closer to the beach, she said.

In the years since her husband, Bill, passed away and grown daughters Madison and Meagan left home, she’s had more free time to fill. Yet it’s always been in her nature to keep busy.

McNaney-Flint has this Friday set aside for vaccination. And the next Friday, and the one after that.

Lindsey Leake is TCPalm's health, welfare and social justice reporter. She has a master's in journalism and digital storytelling from American University, a bachelor's from Princeton and is a science writing graduate student at Johns Hopkins. Follow her on Twitter @NewsyLindsey, Facebook @LindseyMLeake and Instagram @newsylindsey. Call her at 772-529-5378 or email her at lindsey.leake@tcpalm.com.