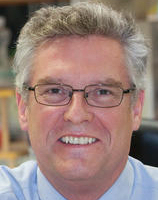 Proteins are the "workhorse" molecules of living systems, providing both the structural elements of cells and tissues, as well as molecular machinery that permits the myriad and complex functions of living systems. The production of large quantities of human proteins by genetic engineering technology has opened up a new field of human therapeutics known as "biopharmaceuticals", and proteins are now the fastest-growing category of new drug approvals by the FDA. Some examples of biopharmaceuticals include erythropoietin (to treat anemia), tissue plasminogen activator (to treat myocardial infarction), and herceptin (to treat metastatic breast cancer). These are just a few examples; the FDA has currently approved over 300 biopharmaceuticals. The economic impact of such proteins is in the hundreds of billions of dollars; and the impact upon human health and quality of life has been immeasureable.

Basic scientific studies of protein structure and biophysical properties allow us to form hypotheses regarding the molecular basis of protein function. In turn, this knowledge allows us to propose ways in which proteins might be modified (i.e. "engineered") to enhance their properties. Such "second generation" forms of proteins may permit more efficient application as biopharmaceuticals. Thus, one of the main goals of our research program is to both expand fundamental understanding of proteins and to apply this knowledge in the development of proteins for human benefit.

FGF-1 is a fascinating protein from a number of standpoints. It is a member of the "beta trefoil" superfold, which means it exhibits three-fold symmetry in its overall architecture. A number of investigators have suggested that this is evidence that it evolved from a series of gene duplication/fusion events. However, a curious aspect of this structural symmetry is that while it is pronounced at the level of the protein backbone, it is essentially absent when looking at the amino acid sequence. The reasons for this disconnect between the primary and tertiary structure symmetry are unclear, but may have important implications for protein evolution and design.

Functionally, FGF-1 is a potent mitogen of vascular endothelial cells, and is therefore a "pro-angiogenic" factor (causing blood vessels to grow at the site of FGF-1 administration. This property has been studied by investigators interested in getting the body to grow new blood vessels into tissues that are starved for oxygen (as in the heart due to coronary occlusion). Human clinical trials have had some amazing results in this area and suggest that FGF-1 can be used as a new type of biopharmaceutical to treat such patients. However, FGF-1 has biophysical properties of stability and folding that complicate its use as a typical drug. We are studying the fundamental properties of folding and stability of FGF-1; these studies are contributing to a better understanding of general protein folding. Subsequently, this information is being used to develop novel forms of FGF-1 with enhanced properties for human "pro-angiogenic" therapy.

Students in the laboratory can gain the following skill set: